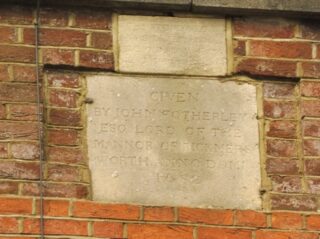 The dedication stone now on the replacement building. The upper stone reads 'The stone below was taken from the old almshouses demolished .....' The lower stone reads 'Given by John Fotherley Esq. Lord of the Manor of Rickmersworth Anno Domi 1682'. April 2017
Colin Wilson 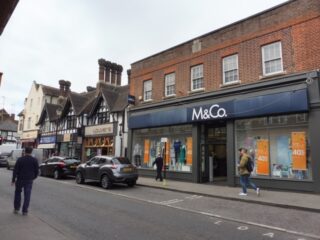 The current site of Fotherley's almshouse. Note the dedication stone just below the parapet. The extreme left of this image is the junction with Station Road. April 2017
Colin Wilson

John Fotherley had mortgaged his estates to King Charles I. After the restoration of the monarchy he regained his estate of the manor of Rickmansworth but not his money. In this respect he fared about the same as Sir John Harrison of Hertford, but did not make the same fortune as John Beresford of Rickmansworth. He lived at The Bury, which still exists and is now a health centre.

Even so, he arranged for almshouses for 5 poor widows to be built on the High Street in Rickmansworth in 1682. The buildings were plain, a series of single storey rooms with doors opening onto the road. A photo can be found in Rickmansworth, a Pictorial History, figs 63/4. He also settled an annuity of £10 a year on them.

Shortly before his death, he conveyed the almshouses to trustees by an indenture dated 18th April 1701, and charged his estate in the parish with an annual payment of £10, for keeping the houses in repair; the surplus was to be distributed among the residents. An extract from the grant of annuity notes that £10 a year was to be paid out of the messuage situated at the north gate of the church, a messuage situated at Scots Hill, a messuage with a close of 2a in the town of Rickmansworth, and the Market House of Rickmansworth. A later document indicates that the sum was paid, in equal proportions, by the lord of the manor and the owner of Rickmansworth Park. The residents also received some income from what was known as Howard’s Gift, from Elizabeth Harman’s will of 1899.

The almshouses continued in use for 250 years until they were demolished in 1932, So far no records about rebuilding have been found. The almshouse dedication stone is shown in photos. It was incorporated on the building which replaced them. This was a Woolworth’s store, then a supermarket after 1971. In April 2017 it was M&Co, a clothing store.

Newspaper reports are the usual ilk. Sales notices appear in the 1857 period. There are reports of teas provided by local worthies Mr McMurray, Mr Gilliatt and Rev. Northey. As happened with the Beresford almshouse, there was also a case of attempted fraud when a woman offered to obtain grants for the residents after they paid a fee.

There is a further query. An 1877 newspaper article about the Rickmansworth Philanthropic Society refers to 11 almswomen. The 4 Beresford and 5 Fotherley dwellings do not add up to this. Maybe there was multiple occupancy. At any rate the residents benefitted from the distribution of the funds.

Historic England
https://historicengland.org.uk/listing/the-list/list-entry/1173409 has details of The Bury

Newspapers
These can be accessed on-line at British Newspaper Archive at https://www.britishnewspaperarchive.co.uk/