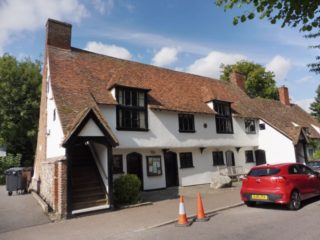 The Town House as seen from the churchyard. 2017
Colin Wilson 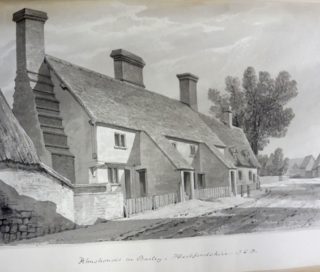 View showing the staircase and other entrance doors. The pudding stone in the foreground has a Millenium plaque. 2017
Colin Wilson 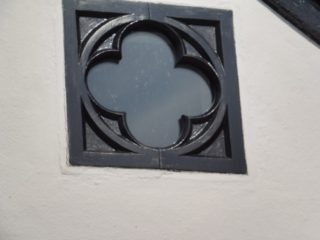 The oriel window at the end of the building. 2017
Colin Wilson 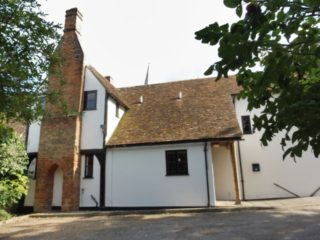 The rear of the building. 2017
Colin Wilson 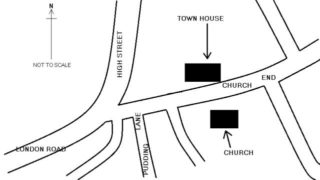 This is one of the oldest Town Houses in the country, built around 1530 (probably 1526). Henry VIII was still married to Catherine of Aragon; Ann Boleyn had just arrived on the scene and the Reformation in England would soon cause significant changes.

The building has served variously as the Guildhall or Church House, a courtroom, a place for the villagers to discuss their affairs, a dwelling place for ‘maides marriages’ (spinsters), a school, an almshouse and a workhouse. It is now the village hall. Cussans not refer to its use as an almshouse, but Victoria County History cites that the lower part was used as an almshouse. The caption to Buckler’s drawing describes it as an almshouse.

At a court held at Buntingford in 1609 the jury decided that the Town House was to be used ‘for the poor inhabitants, for their marriages, to collect and cause by meeting, the gifts of the charitable people to be obtained towards the help and relief of the poor inhabitants within the said town ….. and also for a school house, and so it has been for time out of mind until the late Sir John Spencer Kt, Alderman of London, has made claim to the said house’.  Sir John and his heirs were ordered not to ‘vex the parishioners in their holding’. The phrase ‘time out of mind’ is interesting; the building had only been in existence for 80 years at that point (but it may refer to a building which had previously existed on the same site).

The original plan was rectangular, but late in the 17th century a North wing was added, making the building L-shaped; the straight-run stairs, with solid steps, were in a small wing at the S.E. corner. The ground floor was divided into several small rooms, once used as almshouses. The upper floor was an open hall. The stairs at the south west corner were added in the 20th century.

At one time men, women and children were herded together in the big room, with a madman, on one occasion, chained to the wall at one end.  There were 28 paupers accommodated there at one time. In 1853 36 people lived in the Town House (then used as a workhouse and almshouse). The Rev R A Gordon, appointed Rector in 1853, had them accommodated elsewhere (probably in Royston workhouse) and paid for the conversion into a school. This does not imply insensitivity on the rector’s part, as that was after the 1834 national reforms of the Poor Laws came into effect. . Even so, the ground floor was divided for elderly people to live in until about 1870.

The 1841 census shows most of the people then living in the Town House were born in Barley.

https://www.barley-village.co.uk/town-house-history. This a very useful concise history of the building.

An Inventory of the Historical Monuments in Hertfordshire. Originally published by His Majesty’s Stationery Office, London, 1910.

https://api.parliament.uk/historic-hansard/commons/1837/feb/24/poor-law-amendment-act has the text of a Poor Law reform debate which was adjourned. A lengthy read!