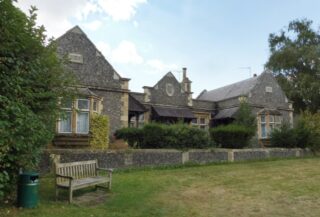 The Mann Memorial almshouses as seen from the cemetery. Aug 2016
Colin Wilson 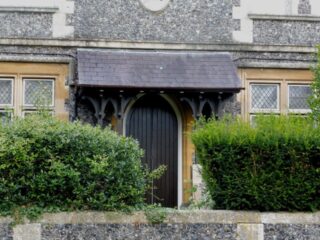 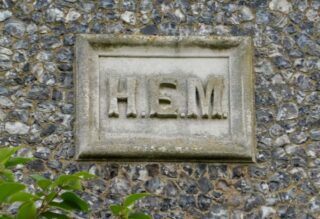 The dedication stone on the left gable. The stone on the right gable has the date 1899. Aug 2016
Colin Wilson 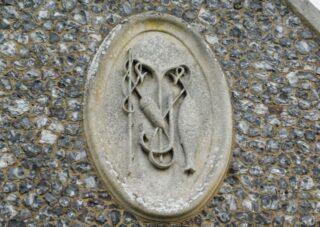 The lozenge on the centre gable, inspired by angling. Aug 2016
Colin Wilson 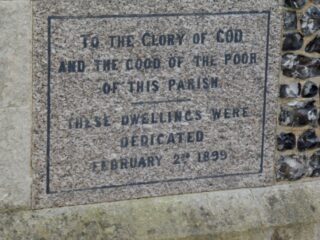 The dedication stone on the Mann Memorial almshouse. Aug 2016

With one exception, Thomas Mann and his family did not survive to old age. Thomas, born in 1848, married Rose Bell in 1871. They lived for a while in North London (near where Thomas was born), then in Christchurch. Thomas and Rose probably started to live at Hyde Hall, Sawbridgeworth, in about 1887, just after Thomas took over his share of the Albion Brewery in Whitechapel in 1886. His family had been involved in the business probably since about 1826 and had become wealthy. They were part of the firm of Mann, Crossman & Paulin. Thomas died in 1897 at the age of just 49.

The dedication stones are of some interest.  There is an inconspicuous dedication stone near the bottom of the right hand corner. The letters HEM on a stone on one of the gables refer to Harold Edward Mann, their son, who died in 1893, just 19 years old. He and his father are buried in the churchyard. While there is no mention of Thomas on the almshouse, the right of way petition specifies the almshouses were built in memory of both.

The buildings consist of three 1 bedroom bungalows were built in 1898 and opened in 1899. However, the petition document states there were four. They are in the Gothic style, with three gables. Each gable has a decorated or inscribed stone. The structure is of knapped flint, with stone dressings. Subjectively, being grey, they look quite attractive on a sunny day, but rather sombre in poor weather. There is a wall next to the churchyard, which once had railings. They were probably removed during World War II when iron was needed for the war effort. The almshouses were refurbished in 1970.

Residence qualifications are to be poor, aged over 55 and have resided within a three-mile radius for not less than a year.

The residents were only able to access the church by going along Spring Hall Lane (now Vantorts Road) and Church Street. In other words they would have to go out of the back of the almshouses. Hence a petition to the bishop (via his representative) to allow an opening to be made near the almshouse, with access rights, a similar-sized plot of land being transferred to the Church. This petition includes a plan of the almshouses. A wall no higher than 3ft would also be erected.

Today these cottages are administered by the Mann Memorial Cottages Charity (ref 227461), registered on 16 March 1964. They are affiliated to the Almshouse Association. The buildings are grade II listed by Historic England ref 1101635.

Strangely, Victoria County History does not mention the Mann family or the almshouses in its account of Hyde hall, even though there are references up till 1910. Maybe the house was rented from the Earls of Roden, but this has not been substantiated. It does mention three cottages occupied as almshouses by three poor women who receive parochial relief run by The Sawbridgeworth United Charities. This may refer to the older almshouses, in another part of the churchyard.