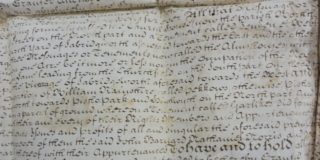 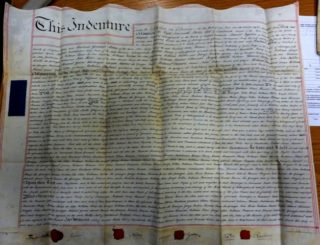 The indenture of 1830.
Courtesy of Hertfordshire Archives and Local Studies. Ref DP/98/25/1 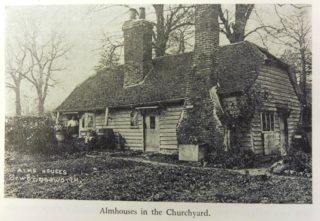 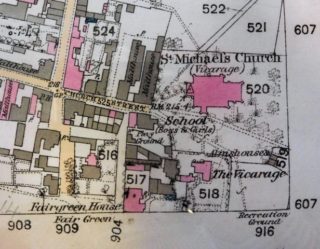 Detail from the 1879 OS map showing the location of the parish almshouse. The church seems to be incorrectly named. The later Mann almshouse was built on the site of the school.
Ordnance Survey, courtesy of Hertfordshire Archives and Local Studies 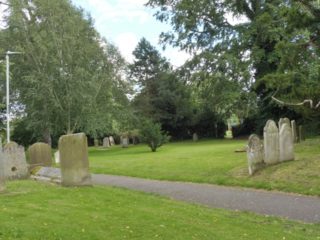 The site of the parish almshouse in 2017
Colin Wilson

The Church and Poor Lands were comprised in an indenture dated 20 July 1652. The English Civil War had ended. Charles I had lost his head just 3 years earlier, Oliver Cromwell was now Lord Protector and the Puritans were the main force in the country.

Later conveyances and indentures dated 1782 (which refers to an earlier document of 1743), 1830 and 1873 are held at HALS. Some are rather faded and hard to read, but transcriptions of two of them have been appended. The 1782 document is interesting in that it differentiates between the almshouse and the workhouse.

According to Victoria County History (published 1912) the income for the Sawbridgeworth United Charities consisted of a moiety [half] of the income derived from the following property:
The bowling green, containing 3r. 22p., used as a recreation ground for boys;
Three cottages occupied as almshouses by three poor women who receive parochial relief;
Pishocroft Gardens, containing about 5 acres, near High Wych, let in allotments and producing about £9 10s.;
And a sum of £720 14s. 5d. consols in the name of the official trustees, producing £18 0s. 4d. yearly, arising from the sale in 1898 of a rood of land in Church Street, with the dwelling-house and school buildings thereon. The net income is distributed to the poor.
This does raise the question as to what income, if any, was derived from the almshouses.

Charles Wade (died 1884) adds that the 3 messuages had for many years been used as almshouses in wh. [three] poor women reside rent free. They are put in on the nomination of the Vicar and confirmed by the Churchwardens. Each of them receives parochial relief […….] at the expense of this parish………….

An image can be found in a publication by Workers Educational Association, on page 27. It shows a hipped roof building, with shiplap wooden walls and substantial brick chimneys. It looks as if one dwelling is entered from the end while the other two are entered from the side.

The site is shown on the 1879 OS map, in the south east corner of the churchyard.  The 1896 Hertfordshire OS 25” map shows the location of the almshouses to the south east of the church. The Mann Memorial almshouse was later built nearer the church, to the south west end. The 1915 revision annotates the Mann almshouses but not the parish almshouses although there appear to be some buildings at that location. That was about 250 years after they had been put up. The site is now grassed over and used for burials

Gerish includes a cutting about some proposed changes to the Church and Poor Lands Charity in 1907.

An unfortunate incident was reported in the newspaper in 1850, “AN AGED WOMAN BURNT TO DEATH: On Tuesday, an inquest was held before Thomas Sworder Esq, Coroner, at the Bell and Feather, Sawbridgeworth, on view of the body of Ann Fordham. The deceased, who had reached the great age of 93 years, lived by herself in an almshouse, near the church. On Saturday an inmate of the adjoining almshouse, who attended on deceased, went into her house and found her lying on the floor, with her clothes on fire, and much burnt. The only intelligible words which she uttered in reply to the questions put to her were ‘[cap] and candle’. Her body was dreadfully burnt, excepting her legs and head. Mr Brickwell, surgeon, attended her. She died at one o’clock on Sunday morning. Verdict – ‘Accidental death’.”

Manuscript materials for a History of Sawbridgeworth Hertfordshire compiled by Dr Charles Wade, died 1884. The papers were purchased by J L Glascock who disposed of them to East Herts Archeological Society.
A copy, dated 1968, is held at Sawbridgeworth library as at Feb 2017.

https://www.sbwhistory.com/wp-content/uploads/2020/03/thomas-mann-DR-untracked.pdf includes a photo of the old almshouses, the same one as is attached to this article.

Hertford Mercury and Reformer, Saturday 02 March 1850 page: 2 col 7
This newspaper article can be accessed on-line at the British Newspaper Archives, https://www.britishnewspaperarchive.co.uk, as at July 2019, and the transcription above has been made from that source.