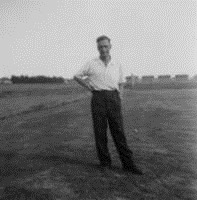 St Pancras seemed to the traveller to be the epitome of London. A large building, its edges broken into a maze of small rooms – some for obvious uses, but most dark, secret – all huddled around the vast central area.  Any traveller that entered this modern day cathedral experienced a feeling of awe, almost reverence.  The platforms were impossibly large, covered, against all odds, with a glass roof: a roof held up by an intricate spiderwork of iron girders.  In this place even such monsters as dreams – or maybe nightmares – were made of faded into insignificance.  The monsters here, however, were real.  They were hissing, fire breathing, modern day dragons, with names such as Stanier and Fowler.

The crowds that were moving around these monsters barely noticed them, such was their familiarity. Walking with this tide of  humanity was a young fireman called Ray Welch. Two young girls walked before him;  their loud conversation revealed to him that they were friends. They had spent the evening at a show in the famous ‘West End’.  It was their Christmas treat to themselves. They had booked the seats many weeks before and could only get them for this night – a cold, frosty, blindingly moonlit night in mid-December.  The year was 1950, five short years after the war. The girls had spent the war years working far into the dark hours, making uniforms for servicemen in the factory near Guildford Road, Luton.

The time by the huge clock that clung – somehow – to the wall over the main entrance was 10:40 pm.  The train, the last, would crawl, via all stations, to Luton, arriving at a quarter past midnight.  They walked to the platform, whose number they had checked on the way in, and showed their tickets.

“Please, is this the Luton train?” asked the shorter girl.

“Yes love,” replied the ticket collector with a slight smile.

“Thank you,” said the other girl, curtly. Ray nodded to the man and followed the two through the gate. The girls walked along the platform scanning the carriages for an empty compartment.  At last they found one, and after entering, pulled down the blinds on the platform side, hoping to keep out anyone else. Ray continued to the front of the train.

“Damned cold tonight,” said Jim, his driver for this trip.

Just as the enormous minute hand of the station clock moved to 10:45, the guard blew his whistle, and gave a quick wave to Jim with his green lamp.  Jim checked the signal and opened the regulator.  The Stanier 4P moved slowly forward.

The train accelerated into the night.  One by one the stations passed. The dark, forbidding walls of Kentish Town; Cricklewood with its myriad points; Mill Hill; then onto Elstree, with the film studio standing by the bridge.  On to St Albans, the small city where Ray lived and had grown up.  Ray took a moment to glance around: to his right were the loco sheds, to his left the main entrance.  Jim opened the regulator and they were on their way once more.  Harpenden’s neatly kept station came and went right on time.  As they came to the signal box at Harpenden Junction, they were stopped.

“Strange,” muttered Jim, more to himself than to Ray.

“I think there’s somebody coming,” announced Ray, “but with all this mist, it’s hard to tell.”

“It’s the signalman,” said Jim finally.  “I wonder what he wants.”

“Perhaps he’s run out of sugar,” said Ray, whose opinion of signalmen had gone down since one had made him stand in the rain for half an hour some time before.

“Evening,” the man said curtly.  “A driver on an ‘up’ reported seeing a body on the line.  Probably kids messing about with the sleepers again.  You’re to do a search anyway.”  Without waiting, he turned on his heel and returned the way he had come.

“Charmed, I’m sure,” said Ray turning to Jim.  Jim said nothing. He just opened the regulator and set the train in motion.  After a few minutes he closed it again, applied the brake and brought the train to  a halt at the outer home signal.  Ray looked at him.

“Nothing,” said Jim.  “I’m not going any further.  This signal’s on danger and if he wanted me to pass, then he should have said so.”  They sat there.

Ray looked at his pocket watch.  It was nearly midnight.  They had been there for almost five minutes already.  He went to his bag and took out the torch, a long powerful torch with a very tight beam.  “I’ll go and have a look then, shall I?” asked Ray heavily.  Jim just smiled and put his tea can to warm.

Ray climbed down from the engine. The intense cold away from the boiler shocked him a little.  He pulled his coat on and buttoned it to the neck.  Out here in the country the frost was so much heavier, a real hoar frost: the bushes to his left had sprouted thousands of pure white needles.  Ray walked towards Luton, the beam of his torch picking out a small yellow patch before him.

The mist was rising from the fields, giving the world a Hollywood movie effect.  The thin overall coat offered Ray very little protection against the cold outside, or even the cold that had started to creep up from inside.  The unreality of the frosty world, turned by a bright moon into a negative image of itself, made him ill at ease.  Ray knew what he had been sent to look for. And hoped he would not find.

The mist ebbed and flowed almost like a phantom ocean.  The night took on a quality that affected the mind in a way that only children admit to.  Above all this was an almost total silence. Ray turned and looked back and suddenly realised how far he had come.  Although a 2.6.4., the Stanier, 42500, was so far away that he could only see the headlamp and hear a slight hiss of steam.  He turned again and continued his search.

Suddenly, it seemed as though everything happened at once.  The torch beam fell between the tracks, straight into the glassy-eyed stare of a human head.  The head was laying over to one side with a strange, calm expression on the face.  Ray swung the beam to the left.   Outside the line of track, dressed in a brown leather coat and brown shoes, laying stomach down, was the body.

He turned and ran.  Ran is probably the wrong word: it was much the same type of movement and mental attitude that occurs in a sparrow that has just left its tail in the mouth of a cat.  To this day, Ray maintains that he ran the four minute mile in just over three.

When he got back to the engine, Ray told Jim what he had found. “Oh, you’d better go and tell the signalman then,” Jim said, and went back to his tea.

By now the train had been standing for over twenty minutes and as Ray walked its length, passengers were looking, and leaning out of the windows.

“Oh,” was all he said and slid the window up rather rapidly.

Another man, overhearing this, opened his door and jumped down just in front of Ray.

“I’ve time for a wee then,” and with a grateful smile he disappeared  behind a hedge.

Ray got to the guard and repeated the tale so far.

“OK, then, see you when you get back,” he said in a matter of fact tone.  Ray continued on his way to the signal box.  The situation was beginning to rub on his nerves.  Events were starting to take on a tone of unreality, almost a dreamlike quality.  At last, he arrived at the Harpenden Junction signal box.

“Well,” asked the signalman, “found anything?”  At least he’s not drinking tea, Ray found himself thinking.

“I’ll tell the police then.  Have you searched him?” he asked in an innocent tone.

“For his money,” said in a tone that insinuated ‘half each’. “If you don’t have it, the police probably will.”

“Please yourself.  Anyway, you can go and tell your driver to pass the danger signal.”  Ray began the long trudge back to the engine.

“No,” said Jim flatly. “I’m not driving over him.  We’re reversing to the junction, then we’ll switch to the down goods.”

This is eventually what they did, but with having to clamp all the points, as per regulations, and then go all the way to Luton with the signals at ‘caution’, they arrived over an hour late. As they passed the spot where the body lay, Ray pointed it out. “Oh dear,” was all Jim would say.  Ray let his gaze linger on the grisly sight as it fell behind them.  He suddenly noticed that every window in the train had sprouted heads.  Lots of heads.

Back in Luton they found, to their surprise, that the story of the night’s events had got there ahead of them.  The dead man, apparently, had been depressed about his failing business.  His wife had reported him missing at 6:00 pm that same evening.

The two girls complained most bitterly to the station staff as they left the booking hall.  They were not alone.  Many passengers felt the need to point out the shortcomings of the service.  The passengers that had looked out of the window, however, left quickly, with their heads down.

For Ray it was just the end of another day ‘on the railway’.