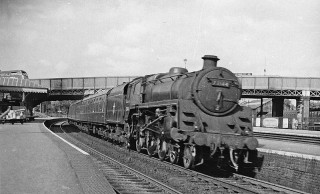 Of all the things that were hated by crews, the one thing that was universally loathed was FOG.  It is surprising that in a country as prone to this phenomenon as England is, a transport system that relied on long distance vision, as much as it did, did not come up with an idea better than oil lamps sooner.

Signals, for example, were of the semaphore type – that is to say, a metal plate the size of an ironing board, sticking out from the top of a high post.  At the post end were two coloured glass discs, one red, the other green.  When the signal was in the up, or off, position, the green light would show.  When the signal was down, or at danger, the red disc was illuminated.  The light was provided by the ubiquitous oil lamp.  Every day, every signal would be climbed by someone, and the lamp would be checked and filled.

Fog was the only acceptable excuse a crew had for running late.  With the best will in the world, speeds cannot be maintained if the driver can’t see the front of the engine.

On this particular day, Ray and his driver, Fred, were coming from London at a snail’s pace.  The visibility was down to five yards, and the steam escaping from the front of the engine was only adding to the problem.  They eventually got to the Napsbury home signal; as this was right by the signal box, messages were often passed.

On this occasion, the signalman told them to proceed to the outer home signal, some two miles away.  The signal itself was by a bridge, so it was relatively easy for Ray and Fred to find the spot where they knew it was.  Unfortunately, they still couldn’t see it.  They waited for what seemed quite a while.

Just as he finished saying the words, a coal train passed them.  It would have killed Ray for sure.  They looked at each other.

After waiting a little longer, Fred spoke. “I don’t like this at all.  I’m going.”

And with that, he opened the regulator a little.  They went at caution, both men looking ahead, all the way to St Albans.  When they finally arrived at the signal box at St Albans south, they were met by an angry signalman who waved then down with a red hand lamp.

“You’ve come by the outer home at danger,” the man said with incredulity in his voice.  “Did you know?”

“We thought it was off,” replied Fred, calmly, “we couldn’t see it properly.”

The signalman took a step toward them. “As there is nothing in front of you it’s OK,” he said, coldly, “but if you do it again,” he went on, his voice hard with threat, “I’ll throw the book at you.”

Signalmen always were the semi-official police force of the railway.  Ray and Fred were very lucky that no further action was taken.  Another driver, Jim W, was not so fortunate.

Engine number twenty four was old.  It was a 2.6.2. and would not steam at all well.  Ray had coaxed the indolent beast to St Pancras, and they were sitting in platform one, by the gent’s toilet, waiting for the train to be pulled out by the other engine.  When at last it left, they followed it.  The plan was to get water from the tower in the small siding, and await the next six coach train that they were to take out.  Number one platform being shorter, six coaches was all that it could accommodate.

They stopped the engine by the water crane.  The crane itself was a cast iron pipe, about one foot in diameter, that stood about fifteen or so feet high.  The top was curved so that the leather pipe that depended from the end hung straight down.  Along the side of this pipe were handles, set at regular intervals, so that the fireman could man-handle it into the tender water tank.

As the water flowed down, the bag, as it was called, would sometimes blow out of the tank and soak the fireman.  To overcome this, a length of string would be found tied to one of the handles.  This would be tied to the water tank cover.  This time, the bag was new and touched the bottom of the tender’s tank.  The pressure of water made the whole crane shake.

The bag was tied, not with string, but with a piece of signal wire – thin, but flexible, steel cable.

Before Ray could untie the signal cable Jim started to move the engine.  He only moved about two feet, but it was enough.  The bag went tight, the steel cable went tight, the water crane started to bend.  Cast iron has many useful properties; unfortunately, bending is not one of them.  The crane had not bent far when, with a loud crack, it broke.  And, as clearly stated by sod’s law, it broke BELOW the massive on-off valve.

Ray and Jim watched, transfixed.  The water was spurting from the broken end of the crane, in a fountain that went at least three feet into the air.  As Ray finally untied the cable, letting the ruined crane fall with a very loud clanking (is it me, or does a mistake ALWAYS make a lot of noise?) the window of the signal box slid open.

“I told you to take water,” the signalman shouted, “not the whole bloody crane.”

When they left, pulling their train, the whole of that end of the yard looked like a boating lake.  Jim had to go to Derby, no less, to receive an official reprimand.  He was told, in no uncertain terms, to ‘STICK TO THE RULE BOOK’.

Water played an important part in rail operations.  Ray and driver were struggling to get the Stanier 2.6.2. to St Albans.  It had trouble with its injectors and wasted a lot of water every time that the boiler was filled.  As the tender only carried two or three thousand gallons, the situation soon got serious.

As they passed the box the driver shouted to the signalman, “Tell them at Mill Hill that I want water.”

This would mean uncoupling the engine and taking it into the siding.  Confident that arrangements had been made, the driver continued to the next station.  When he got to Mill Hill, he saw a porter standing on the platform.  Next to him were two buckets of water.

“What have you got those for?” asked the driver with a sinking heart.

“You said that you wanted water,” replied the porter.

The driver’s reply was as long and inventive as it is unprintable.