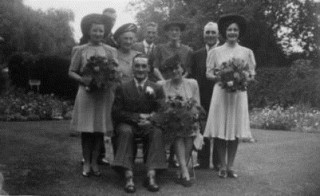 Ray had met his future wife when she had taken lodgings with a friend of his.  Betty worked in the De Havilland aircraft factory in Hatfield.  She came, originally, from Hertford and found the daily journey totally impractical.

Betty was the youngest of the five daughters that Joseph and Alice Duke had brought up.  Joseph, like Arthur, had served during the First World War.  Indeed, the compassionate leave that he had been granted, to be with his wife during a serious illness, had probably saved his life.  He was to have gone, with his regiment, to north Russia.  The troop ship that he would have been on was torpedoed, and had sunk with great loss of life.

He had settled in a quiet street, right on the northern fringe of the county town, Hertford.  It was from this happy, Baptist life that Betty had come.  She was to ‘DO HER BIT’ helping to build the famous De Havilland ‘MOSQUITO’ fighter/bomber.  It was to be a life style that only the ravages of war could have forced upon her, and many others of her generation.

Betty had been lucky enough to find lodgings with a decent family, much to her mother’s relief, who lived in a neat house in Oakwood Drive, St Albans.  The son of the family was a great friend of Ray’s.  It was not too long before Ray and Betty were going out together.

To cut a story short, they were married early in 1944.  Their son Derek, your author, was born in 1945, just before the end of hostilities.  They were living in rooms in a house on the edge of St Albans.

Life was hard for them,as it was for many during those days of deprivation.  In these days of bulging supermarkets, with people spoiled for choice from goods from every corner of the globe, it is hard to imagine the strains of rationing.  EVERYTHING was rationed: food, clothes, fuel.  Things that we take for granted, were, to them, unobtainable luxuries.

A thing that made Ray angry was that coal was rationed for domestic use.  This meant that he spent all day burning literally tons of the stuff, and would go home to an almost empty grate.  ‘Appropriation’ of railway coal was out of the question, as even a minor offence merited the sack.  Pinching coal was definitely NOT a minor offence.  Anyway, you can’t get much coal onto a push bike.

The winter of 1947 still stands out in people’s minds.  The snow started to fall on the eighth of January, and never went away until the end of March.  It is still referred to as ‘THE BIG FREEZE’.  Most roads were impassable, as were most railway tracks.  Anything and everything was brought into service to clear the stricken rail network.  Snowploughs, shovels, heavy engines running light.

They say that desperate times breed desperate measures, this was to be no exception.  Some unsung genius had the wacky idea of mounting one of the ‘new fangled jet engines’ onto a  flat wagon.  The idea was that the jet exhaust would blow the snow away.  Much to people’s amazement it was tried.  Much to everyone’s astonishment, it worked like a charm.

Putting an engine away was not so straightforward either.  As well as all the normal duties, crews would have to lay two metal plates on the ground, one each side of the engine, under the cylinders.  On these coal fires were lit to stop the pistons from freezing to the bores.  But still a lot of trains did not get through.

Coal started to get very scarce indeed.  Factories closed, power stations shut down, domestic coal all but disappeared.  A task that six years of war had failed to achieve, took the weather six weeks.  The home fires stopped burning.  When, at last, coal trains became a little more frequent, people would come out from their houses to stand by the track.  They would beg the crews for fuel by waving a small knob of coal over their heads.

Some drivers would, occasionally, relent, saying to the fireman, “Go on, give her a lump.”  Most, however, would just say, “Sorry, we haven’t got enough for ourselves.”  Ray remembers coming all the way from London with nothing but dust in the bunker.

Water cranes were a problem until a special brazier with a very long chimney was invented.  These were kept alight twenty four hours a day and got so hot that they glowed in the dark.  Every crew that used the crane would be expected to tend the fire within, raking the bars and re-stoking.  They would also be expected to leave a pile of coal so that passing plate layers could fill the intervening gaps.  It was common to have to break off a large icicle before filling the tank with water.

When, at last, the weather broke, coal trains had priority over EVERYTHING – even passenger trains had to take second place to the almost constant stream of coal that was replenishing the nations empty stocks.

The coal that most users got was properly graded.  The coal that the railways got was not.  If an engine, especially a tank engine, was coaled up, unsupervised by the driver, then the bottom of the bunker would be full of the largest lumps that would fit.  This caused the fireman a lot of work, hammering away at them with his pick.  The first sign of lumps that a fireman got was when the coal stopped falling into the bunker door.  This meant that a large lump had blocked the exit.

One such caused Ray much trouble.  He was firing 7261, when a lump blocked the bunker door.  He tried the pick, but to no avail.  In the end, Ray knelt down and reached inside to try and free the lump by hand.  It came free a lot easier than he expected, and fell.  Ray was just a little too slow in removing his arm, the lump crashed down, badly gashing the inside of his right wrist.  It bled profusely, but as engines NEVER carried a first aid kit, Ray just wrapped a piece of rag around his arm and continued working.  Not heroics, just the only thing that could be done.  To this day, Ray has a scar, filled with black coal dust, on the inside of his right wrist.

The freeze at its worst played a few tricks, as well as havoc. Ray was firing a local passenger train that was due to arrive at St Pancras at eight thirty pm.  The engine was a Stanier tank, one of the twenty five hundred series.  They were running bunker first on an otherwise uneventful journey.  The night was bitterly cold, the wind blowing through the cab was positively arctic.

They were between Cricklewood and West Hampstead and had been coasting.  The driver opened the regulator a little and said, “I wonder what’s gone wrong.  I’ve got the large ejector on, but it’s not making any difference.  At this rate, we’ll be lucky to make it to West Hampstead.”

Ray looked around him again. “Well everything looks alright.  The fire’s OK, the steam’s OK.”

As he made the last statement, he did what everyone does, he tapped the gauge.  Of course, this NEVER makes any difference, but it makes us FEEL better.  This time, however, it did make a difference.  The needle in the gauge dropped to 140 pounds pressure.  The bitter wind in the cab had frozen the gauges.

Ray put some coal on the fire quickly to build up the pressure in the boiler.  The steam pressure is critical below a certain point.  The brakes on most engines worked on vacuum.  The vacuum held the brakes off.  Thus, if anything failed,  the system maintained complete safety.  The vacuum was created in a large chamber under the cab floor.  The air was evacuated by the ejectors.  These worked in a similar way to a scent spray.  Steam was passed over a type of nozzle inside the boiler, and siphoned the air out of the vacuum chamber.  When the steam pressure dropped below a certain level, the system did not work properly.  Indeed, if the pressure dropped too low, it did not work at all.

As the run from St Albans to St Pancras is mostly downhill, it was normal practice to let the fire run down from about Cricklewood.  This was not the result of laziness, but an attempt to adhere to the unwritten, but strict, rules of taking an engine into the St Pancras complex.  The crews would let the fire die down so that the engine made the minimum amount of smoke while in the platform.  They would also let the water level drop a little.  The worst sin of all was to let the boiler build up pressure so that the safety valve ‘blew off’.  The noise that this made not only frightened the passengers, but drowned out the station announcements.

So, how to stop the pressure building up?  Simple.  This is where the low water level came in.  The fireman would watch the gauge, and when the pressure got too high he would put a little more water into the boiler.  This lowered the internal temperature just enough to lower the steam pressure.  They were not always successful, though, as they would have to wait anything up to one and a half hours before leaving.

Even everyday, mundane tasks became burdensome during the freeze.  Ray and his driver were putting empty carriages away in the Cricklewood sidings.  To do this they had to make several shunts over points.  Every time that the points moved, they froze.  Every time that they froze, the signalman had to get the plate layers to salt them.  A ten minute job turned into an hour and a half.

Ray always felt a little apprehensive when driving an engine through virgin snow.  There was no track, no landmarks, and you had to trust that the snow was not covering something that would de-rail the train.

When the freeze finally broke, the next problem was flooding.  They were on the main down fast line between St Albans and Harpenden, when a plate layer flagged them down.  In front of them the water, running off of the fields, had washed the embankment away.  A cascade of water was flowing, like a river, onto the track.  It had begun to wash the ballast out from under the rails.  They were allowed to cross the site, but at extreme caution.