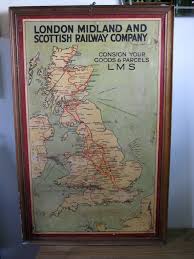 Trains that were to terminate at Moorgate followed the main line as normal.  After pulling into Kentish Town, on platforms three and four, they would continue toward London.  When they passed the Islip Street signal box, they would peel off to the left.  This branch led into the underground system.

The first thing that was encountered was a tunnel.  No ordinary tunnel.  This one not only twisted and turned, but had a very steep down gradient in, and an equally steep slope out.  At the bottom of the tunnel, in the pit of the ‘V’, as it were, was a signal box.  Since conditions in this place were, at best, terrible, these were the only signalmen that Ray regularly felt sorry for.

The tunnel emerged just before Kings Cross underground station, which at this point was on the surface.  Indeed, apart from the odd road bridge, the line was above ground from the infamous tunnel all the way to Moorgate itself.  The line went through Farringdon, through Barbican and ran into Moorgate station in the same area as the Circle Line, although still two platforms away.

The L.M.S. line came to a dead end here, so the engines, all Fowler 2.6.2.s, would uncouple and wait until the last engine came out of the small siding, complete with water crane, and took the train back the way it had come.  The first engine would then move into the siding and wait its turn.

The outward trip was always done bunker first.  This was important as there were no turning facilities at Moorgate.  The return trip was mostly uphill and the ‘Moorgate engines’ were bad steamers anyway, and needed every little bit of help that was available.  The engines were so bad at maintaining a good head of steam, that even keeping to the timetable was a challenge.

Ray’s first driving trip came in the summer of nineteen fifty.  He had finished a trip firing as usual and, as normal, checked the roster board.  To his delight, he found that he was down as driving the two forty three, all stations to Moorgate.

“You’ve got your first trip then, Ray!” a voice behind him happily announced.

“Yes,” was all Ray could manage in reply.  He went home that evening a VERY happy man.  He felt that an important milestone in his life had been reached.

Next afternoon, Ray signed on as normal.  He met up with the young man who would be his fireman for the trip, and together they went to platform four to await the train’s arrival.  The fireman, who Ray knew vaguely, was quiet and rather subdued.  Also, he kept looking at Ray intently.  The train arrived, on time, and the two crews changed over.

The trip itself went perfectly.  They ran into Moorgate on time, and stopped.  The fireman turned to Ray, and in a voice that had more than a little relief in it, said, “Oh, you did that alright!  I didn’t know if you knew the road or not.”

Ray looked at the man askance. “I wouldn’t have got the trip if I didn’t know the road, now would I?  After all, I did sign for it.”

One of the first things that a man was asked to do after he had passed his driving test was to go into the foreman’s office and sign a form, stating which routes he knew.  He could, at any time, upgrade this list, adding to it as further experience widened his knowledge.

The foreman, in his turn, would not roster a man to drive on a route that he had not signed to say that he knew.  This put any mistakes firmly in the lap of the driver.  More importantly, it ensured that only men experienced in that line, drove.

After a while, Ray found that far from being a ‘step up’, the rank of ‘passed fireman’ was becoming something of a millstone around his neck.  For example, one day he would start work at three thirty am and work his shift until eleven thirty am having all afternoon off.  The next day, he would start a driving job at five thirty pm and work until one thirty the next morning.  This meant that, as the rules stated that a man should have a mandatory nine hours minimum off between shifts, he would not be able to sign on again until ten thirty am and would then be put on shed duty, shunting in the yard, putting engines away and the like.  Hopefully, he would be able to start work the next day on his normal fireman’s shift, and would be able to earn overtime once more.

Human nature being what it is, it seemed to always work out that Ray would fill in for a driver who was taking his day off, normally called ‘rest days’, and it would always seem that the job the driver was down for was one that did not allow overtime.  Ray just had to grin and bear it.  He needed to clock up the required number of driving jobs to qualify him for a pay rise.  Even with the shilling a day extra he got on these trips, he still found himself quite a bit short at the end of the week.

One of the jobs that Ray hated most meant that he would sign on at eleven thirty am, and sign off at six thirty pm.  He would have to leave home too early for lunch, and would get home too late to join in the family tea.

The rail system was, by now, nationalized.  Driving jobs in small locos, such as St Albans, did become vacant, though only in a trickle as men left, died, retired and the like.  Under the old system, the man with the most seniority who had applied for the job, got it.  After nationalization, however, rule changes meant that men from other areas would suddenly get the job that had become vacant.  These men brought their seniority with them, and would jump over the heads of Ray and other local men.  As St Albans seemed to be a favoured place of retirement, Ray began to see a future filled with upset working hours and restricted pay stretching out in front of him.