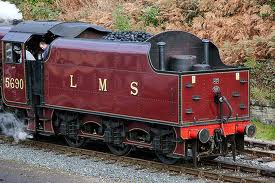 By now, Ray had been ‘on the railway’ for more than a dozen years.  He knew everyone, everyone knew him.  Once or twice the day of his first trip, when he had sat in the Luton mess, drinking tea and listening to the men talking, crossed his mind.  Then, he had been the new boy.  He had had little to add to the general conversation.

Now, however, it was a different story.  Ray had a wealth of knowledge and experience, and the mess room conversation circle ALWAYS included him.  The talk ranged over many topics, as is normal in these situations.

Many memories and incidents were passed around there, like the summertime night when Ray was firing a 3F that was running on the up goods line, on the steep bank between Harlington and Leagrave.  It was a long, hard pull, and with thirty six wagons behind them they were down to little more than a walking pace.

As they entered a chalk cutting, Ray noticed that the bank was covered with tiny dots of light.  Intrigued, he stepped down onto the bottom cab step and hung out as far as he could.  He was surprised to see that the entire cutting wall was covered with glowworms.  As the M1 motorway now runs only yards away from this bank, it is doubtful whether such a sight could be seen today.

Engines from Wellingborough had their own place in the Cricklewood complex.  Nobody quite knew why, but these engines always had their fires cleaned by a gentleman with the unusual name of Gotobed.  Mr Gotobed had his base in the cavernous room that was beneath a water tower.  The crews would have to telephone control from there to find out what their next job was to be.

The black wall of this place had been subject to the attentions of an Italian prisoner of war.  It boasted a large, white chalk picture of a naked woman.  Not the smutty, schoolboy type, but a work of fine art.  Ray never met anyone who did not admire the sight.

Italian P.O.W.s would do odd jobs around the locos: stacking coal, cleaning engines and the like. To make ends meet, they took to making small items from the scrap copper that they would find.  A thumb-sized piece of copper tube and two farthings would be turned into a reliable cigarette lighter, and would sell for six pence.  Threepence bought a teaspoon made from a halfpenny and a piece of copper wire.  These, and other items were often bought as last minute gifts.

The traffic at Cricklewood was heavy, and the demands on the turntable facilities were equally great.  To ease this load, a loop line went between Brent south west sidings and Cricklewood sidings.  This line went very close to the main A5 at Staples Corner.

The line was controlled by a staff system.  A box at either end would show an indicator bar.  The red bar meant that someone the other end had put a staff in first, and you would have to wait.  If you were quick enough with your staff, a white bar showed, and you were off.

This loop, by the way, was one of the few places that a Garratt could be turned.  At over eighty seven feet long, these engines were half as long again as most turntables.

On one occasion, the staffs were put into the boxes at each end and turned at EXACTLY the same moment.  As neither end could see the other, the first warning that the two crews got was when the two engines met in the middle.  One engine was de-railed, and it was only luck that nobody got hurt.

The radius of this loop was very tight indeed, and the wheels of the larger locos could be heard scraping and grinding over most of the curve.  One small shunter took the loop too fast, de-railed, went off the track, down the bank, and ended up, not only in the middle of the main road, but on the front page of the local paper.

Every morning at five minutes past five, a ‘workers’ train left St Albans station.  During the winter months, the crews were allowed a little longer to prepare the train.  This time was to be spent warming the carriages.  Steam from the engine would be passed through pipes to the heaters under the seats.  To speed things up, the fireman would go to the rear of the train and open the brass valve that marked the end of the system.  This had the effect of allowing the steam to force out the cold water that collected, thus greatly speeding the warming process.

This time, Ray went to the rear as usual, only to find that the tap had frozen shut.  Taking the trusty smoke box spanner, he hefted the offending gadget a clout.  This freed the tap, but also sent a small sliver of brass straight into his eye.

Time, tide and the railway wait for no man, so Ray was forced to work out his shift in ever increasing discomfort.  At two pm he finished work and made his way home.  The first thing he did was to fashion a loop of cotton on the end of a matchstick, and remove the source of his torment.  To this day, his eye still bears the mark.

Years before, Ray’s father had been shunting coaches, during the night, that were intended to make up this very train.  ‘Jimmy’ was moving the coaches to a position behind platform four.  They were to be put into a siding that went between the platform and the cattle dock.  Unfortunately, the points had been set wrong.  The shunter kept calling Jimmy back, so back he went.

When he got to the point that he knew was the six car stop, he did just that.  At the instant he stopped, the shunter showed his red light.  The man came up to the engine’s cab, and in a matter of fact tone calmly stated, “You’ve just put two coaches onto the cattle dock.  One on top of the other.”

Another driver was reversing nine coaches into the centre siding at the north end of St Albans station.  He knew that nine coaches would just about fit if the engine was stopped just under the Hatfield Road bridge.  The shunter kept calling him back.

“We’re going back a long way,” remarked the driver to the fireman.

At last, the shunter stopped them at the six car stop.  A while later, the man came up to the crew and somewhat worriedly said, “We’ve just put three coaches on the platform, or rather, two on the platform, and one on top of the buffers.  And we’ve wiped out all the gas lights as far as the urinal.”

During nineteen fifty one, a great topic of conversation was the eight freights that had been converted to oil burning.  Ray had only one trip on such an engine.  The driver drove as normal.  Ray, on the other hand, stood behind a technician who operated the burner controls, explaining his actions all the time. Ray does admit that his chatter went in one ear and straight out of the other.

The whole project was soon to be abandoned anyway, for two reasons.  One, the huge cost of conversion, and two, the Abadan oil fields were nationalized by their government, sending the price of oil through the roof.

Ray says that was the easiest day’s work that he has ever done.  He just stood behind the man and got off as clean as he got on.

Pranks were not unknown either.  One cold morning, five or six men were clustered around the brazier that stood outside the door in the engine shed that led to the fitter’s workshop.  Suddenly, there was a great ‘WHOOSH’ and the flames almost hit the roof.  A fitter had thrown a can of paraffin onto the fire.

The mess room was not without incident.  The room was heated by a large fire that burned in the central fireplace.  Men were seen leaving very quickly after someone dropped a fog signal down the chimney.  The resulting explosion scattered the fire all over the room.

Many men caught a short nap in the mess.  One man however, was quite a heavy sleeper.  The conversation wandered onto the subject of just what it would take to wake him.  The room was always home to a great number of old coats.  These were piled on top of the sleeper until about a dozen were in place.  The room was always warm anyway, so it was only a matter of time before the man awoke drenched with sweat.

The old story of breakfast cooked on the shovel was perfectly true.  One Sunday morning the driver had let Ray drive.  The man said, “You know, I’m really hungry this morning.”  So between Elstree and Mill Hill, a section where the train would coast, the driver cooked his breakfast.

“Don’t open that regulator,” he warned Ray, who already knew that if he did the man’s food would be sucked straight off of the shovel by the increased air flow to the fire.

It was more usual, however, to wait and cook in St Pancras.  Many times passengers had remarked, “That smells nice driver.”

Memories such as these come and go.