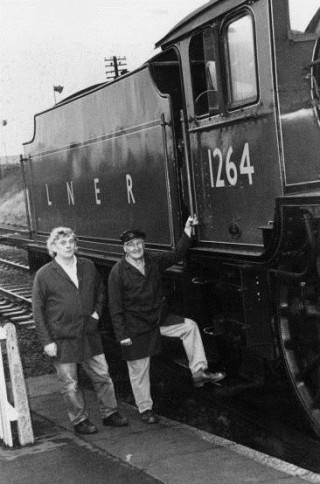 During the war, particularly the latter years, army and air force units were stationed around the St Albans area.  As the city was largely ignored by the enemy, it was thought to be ideal for the battle weary to spend their periods of Rest and Relaxation.

One of the pastimes that was very popular among both troops and civilians alike was football.  The forces would play friendly games against local teams.  Then, as today, most large organisations had a team.  Ray played for the L.M.S., and would come up against teams from the post office, Hill End Hospital or a host of others.

These teams met with varying degrees of success during their matches.  On one occasion, the L.M.S. played a team from the R.A.F.  The air force had not lost a game in a very long while and were more than a little put out when the L.M.S. beat them three one.

Units of the famous ‘Desert Rats’ eighth army also rested in the area and the railwaymen duly played them.  The unit consisted of mostly Scotsmen and on the day, the L.M.S., who were considered to be quite a good team themselves, were amazed to find that they were trounced eight nil.  Ray found out later that there were no less than five professional footballers in their side.

It was during these games that Ray started to develop cartilage trouble in his left knee.  It got steadily worse until in September 1953, three months after the coronation of Queen Elizabeth, he went into St Albans City Hospital to have the offending cartilage removed.  Altogether, Ray was off work for two months.  He was annoyed that during the whole of this time, nobody from the railway came to see him to ask how he was.

The grossly inadequate sick pay did not improve his humour.  Money was getting VERY tight indeed.  So, after eight weeks, Ray was much relieved when the doctor signed him fit for work.

His own doctor that is.  Normal practice stated that anyone that had had a protracted illness had to be seen by the railway’s own doctors before they were allowed to carry on working.

Ray had his medical in the same Euston Road centre that he had gone to thirteen years before, as a lad.  The doctor examined his leg and said to him, “It looks OK, but for the time being, you should have a light firing job.”

These fateful words were put into a letter which Ray, upon his return to St Albans, handed to his foreman.  The man read the paper and said, “Well, I can’t find you a light job.  So you’d better stay off work.”

Ray was staggered. “Isn’t there a shed job I can do?” he said.

The foreman looked at him and said, “No, there’s nothing here for you at all.”

Ray left the loco feeling very angry indeed.  The foreman’s decision meant that as he was now officially signed ‘fit for work’, he would lose the paltry sum that he was being paid, and would get absolutely no money at all.

On his way out, he met a driver.  ”Hello Ray,” the man greeted him, “when are you starting back to work then?”

All Ray was able to say was, “They won’t have me back yet.”

The two men eventually fell into conversation.  The driver told Ray that he too was feeling disgruntled and he had even been after a job at the De Havilland aircraft factory, in nearby Hatfield.

On his way home, Ray started thinking.  He thought, ‘Blow it.  There doesn’t seem to be a job for me on the railway anymore, so I’ll try somewhere else.’

A few days later found Ray at the De Havilland propellers factory in Manor Road, Hatfield.  To his surprise, he was offered a job in the stores, ‘Start as soon as possible’.

The wages were seven pounds fifteen shillings a week, which was two shillings a week more than his railway pay as a passed fireman, with thirteen years service, had been.  Also, monthly bonuses were to push his money up to a previously undreamed-of level.

It was a VERY relieved and happy man that cycled away.  He went straight to the loco and straight into the shed foreman’s office.  He looked the man in the eyes and said, “You can stuff your job.  I start at De Havilland’s tomorrow.”

The look of shock on the foreman’s face brought a lot of satisfaction to Ray.

The man recovered himself. “Do you want time to think about it, Ray?  We don’t want to lose a good man.”

In a voice made calm by the knowledge that he was right, Ray looked straight at him and said, “I asked you for a light job, you said NO.  I even wrote to the area superintendent.  He also said NO.  He also made it plain that he couldn’t care less.  So, I have no other choice.  I’m off.”

With that, Ray handed him his rule book, his overalls and his cap with the badges.  He picked up his cards, turned on his heel and left with out a backward glance.

Ray’s father found out when he finished his shift.  He was furious.  Jimmy went straight to the union man. “This is a bloody disgrace,” he fumed.

The union man said, “He should have come to me.”

Ray learned later that nearly all of his colleagues were up in arms at the shabby treatment they felt he had received.

And so, Ray’s career on the railway came to an end.  The next day, he started his new job.  He was to spend the next thirty four years working at the Hatfield site.  He had many happy times there and many strange experiences.  But that, as they say, is another story.

It is a cold February morning, half a lifetime later.  Ray, now over seventy, and his son, himself fast approaching middle age, were walking together toward the engine sheds of the Great Central Railway, in Loughborough.  They passed under the road bridge and stood, watching.  The restored engines arrayed before them, gleamed in the winter sun.

Ray turned to Derek and said, “You know, it’s good that this part of history has been saved.  But these people don’t have a clue what it was really like.  They want to try doing this at three o’clock of a January morning.”

Derek just said, “Yes Dad, I think we ought to tell them, don’t you?”