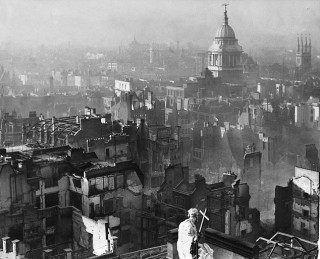 The railways, by and large, ignored the war.  They conformed to all the regulations well enough, the blackout etc, but in most other respects the system pondered on regardless.

The blackout restrictions they employed extended through station buildings, locosheds, and onto the engines themselves.  The brilliant beam that lit up the night whenever the fire door was opened was held in check by the simple addition of two canvas curtains, one either side of the engine.  On tank engines, this was just what it seemed.  The curtains were fixed to the cab door frames by attaching eyelets to specially fitted hooks.  On tendered engines however, a canopy was also slung from the cab roof to the tender.

This arrangement may have thwarted the Luftwaffe, but it usually made a tough life harder for the crew.  During the summer it made the footplate area stifling hot.  Thankfully though, due to double summer time, the hours of darkness were short.  Not so in winter.  Although the curtains kept out some of the draughts, when running bunker first it was very unkind to brass monkeys.

To make matters worse, when the bunker’s coal level was low, the cab filled with coal dust.  This could be kept down a little by using the slacking pipe.  This was a pipe that delivered hot water, and was used not only to damp down the coal, but to clean the footplate ready for the next shift.  (Unfortunately not all crews bothered to attend to this courtesy.)

Another, and sometimes hazardous, use for this pipe was for the crew to wash their faces and hands.  Now St Albans has always had very hard water.  To counteract the build up of lime scale, an employee was entrusted with the task of putting softening salts into the water towers.  If he was feeling particularly generous and threw in a larger than normal portion, then the crews would go home with faces burned bright red.  This semi-caustic water did keep the wooden cab floors clean however, although some were not worth the effort, with gaping holes through which the track could be seen.

Although the blackout was a very successful method of keeping the exact location of centres of population somewhat of a mystery, it had drawbacks.  In today’s light-polluted world, when even the glorious spectre of the star-filled night sky is denied us, it is difficult to imagine just how dark the night can be.  Those who have experienced a holiday in an out of the way location can get an idea of the sheer scale of wartime darkness.

St Albans is twenty one miles north of London; even so the raging fires that accompanied air raids on the capital could be easily seen.  On nights as dark as these, the shiny tops of the rails laid a trail that even the most myopic of pilots could follow.

A railway engine exhausts vast quantities of steam and smoke from its funnel.  Standing at trackside, it is not instantly obvious just how large these appear from the air.  In a totally black landscape, the exhaust plume of a locomotive stands out like a brilliant, white arrow that can be seen for a dozen miles or more.  Indeed, more than one crew had occasion to give thanks when the first indication they received that an enemy was about was when a bomb exploded next to the train.

St Pancras was hit, on one occasion, by a bomb that, although it never exploded, caused extensive and inconvenient damage.  The device dropped through the glassless roof, through platforms three and four, through the underground railway and came to rest in a lower tunnel that contained a subterranean river.  For a long, long time after that these two platforms could only accommodate short trains.  Wooden barriers were erected to act as temporary buffers.

Some of Ray’s earliest recollections of St Pancras concern platforms five and six.  These were devoted to the handling of goods and post.  A service road went between them, and the constant coming and going of post office vans and railway freight lorries had that attention grasping, hypnotic effect that suddenly makes onlookers realise that they have been watching for half an hour.

Ray was surprised to see a horse at one end and found that the beast was used to turn a capstan that moved, with the aid of a rope, the goods wagons.  These were towed, one at a time, from the parked position to the unloading position.  It was about here that the wagons loaded with beer disappeared, via a lift, down into the brewery stores beneath the platforms.

St Pancras, even now, is not the quietest place on earth.  In those days, with the engines roaring and hissing, it was cacophonous.  At times, the noise got on even Ray’s nerves.  It never seemed to bother the horse though; the animal kept plodding round and round.

It was probable that nobody would have cared if the horse had been upset – that world had a different attitude toward livestock.  Cattle were transported live for one reason only: warm meat stays fresh.  When Ray heard an unusual, non-mechanical noise, he investigated.  Laying on the ground, by a stack of other goods, was a sack.  From the top of this sack a calf’s head protruded.  The noise that Ray had heard was the calf’s terrified mooing.

He was to discover that this was the normal method of transportation for these animals.  Ray has never been one to inflict unnecessary suffering on animals of any sort, so the sights that met his eyes left a sour taste in his mouth, and still do even now.

At Kentish Town were sidings known as ‘cattle dock’ sidings.  It was at these that Ray saw things that stay with him to this day.  Whole trains of cattle trucks, each truck loaded almost to bursting with cows:  the spaces between the slated sides filled with lolling tongues, white, hysterical eyes, and the air filled with an overpowering stench.  These were the ‘lucky’ animals.  Most had been badly battered about by the shunting, and some lay, unable to get up in the crush.  Others had broken legs.

The sheep fared no better.  One particularly hot day, Ray was moved to fill an old bowl with water and offer a drink to one hapless beast that caught his eye.  He did not repeat the gesture as the animals literally fought to gain access to this meagre offering.