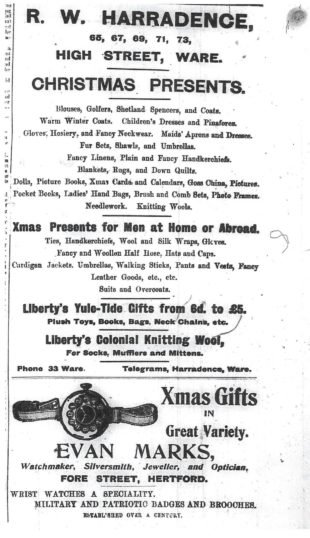 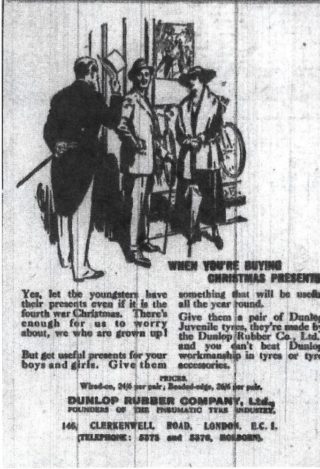 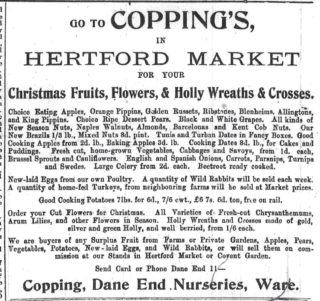 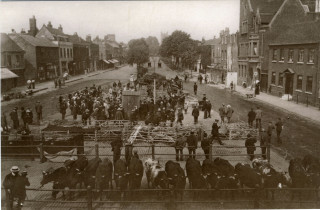 In spite of the war, the December 1917 editions of the Hertfordshire Mercury carried many advertisements for Christmas fare and ideas for presents.  R W Harradence of High Street, Ware, for example, listed some enduring items such as gloves, handbags, dolls and picture books but it is doubtful if many shoppers in Ware today are looking for maids’ aprons and dresses.  In Harpenden, Anscombe and Sons also included aprons in their list of potential presents along with pinafores, work baskets, down quilts and fancy linens.

Botsford and Vale in the Market Place in Hertford encouraged customers to give useful presents with cutlery, razors and lamps as some of their suggestions.  Christmas crackers were available but although Bates Brothers of Fore Street, Hertford were able to boast of a “large variety”, Government restrictions meant that they were unable to issue their usual detailed list.

The Dunlop Rubber Company also advised on useful presents with “Yes, let the youngsters have their presents even if it is the fourth war Christmas….Give them a pair of Dunlop Juvenile tyres….”

Turkeys were also stocked by Copping’s in Hertford plus wild rabbits and eggs.  Fruit and vegetables included cooking apples from 2d. a pound, cabbages from 1d. and large celery from 2d. each.  For decoration, chrysanthemums and lilies were available plus holly wreaths from 1/6d. each.

There were some shortages.  In St Albans there was a determination “to rid the city of the nuisance of the margarine queue”.  The Hertfordshire Mercury reported that the local food committee went to the shop run by the Maypole Dairy Company and distributed the margarine that had been delivered to them to other outlets in St Albans thus encouraging the queue to disperse to other shops.*

Money to provide for all these good things may have been provided by membership of savings clubs during the year.  At Kimpton, the Annual Slate Club shared £87. 16s. 0d. amongst its 63 members giving each £1. 7s. 0d. to spend.  There were also acts of charity. The Hertfordshire Mercury reported that in Braughing  “the ancient custom [of Goodening] was observed on St Thomas’s Day when seven  widows perambulated the village in quest of alms to provide good cheer.  They were well received by the residents and the money collected was equally divided amongst all the indigent widows of the parish by the Rev. W. W. English.  A century ago the widows who went Goodening always donned red cloaks”.

*For those who were fed up with queuing, the Hertfordshire Mercury printed a recipe for making the ration of butter go further in February 1918:

Beat with the back of spoon and if it is to be kept for a few days, add a preservative

As it does tend to dry out, store in greaseproof paper.