Near Miss at Beaumont School 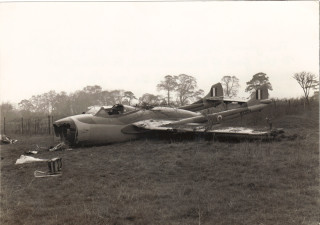 In November 1955 I was sitting in Mrs. Ireland’s class on the first floor of Beaumont School, St Albans looking down the playingfields towards Hatfield Road when I noticed a DH Venom Nightfighter 3, WX974, trying to make an emergency landing on the playingfields.  It ran out of room and just managed to fly over the roof of the school.  It then attempted to land on the rear playingfields before running across Sandpit Lane finally coming to rest in an orchard.  The pilot received minor injuries and by his actions prevented the aircraft from crashing into the school.

Photo taken the next day.