The Death of a Duke Foretold in St Albans 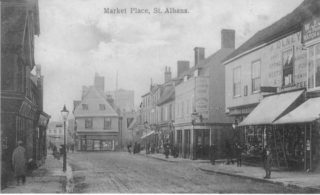 The First Battle of St Albans, on 22nd May 1455, marked the beginning of the Wars of the Roses and was the first of several battles in that conflict fought in Hertfordshire. Politically crucial, it’s also notable for a strange, apparently supernatural detail remembered in local tradition.

The Background to the Battle

The origins of the Wars of the Roses lay in a power struggle between the powerful Dukes of York and Somerset in the vacuum left by the ineffectual King Henry VI, who suffered from a debilitating illness  ̶  possibly porphyria, the same affliction that later affected George III. Richard Plantagenet, Duke of York, had a technically better claim to the throne than Henry, who favoured his rival, Edmund Beaufort, Duke of Somerset.

Matters came to a head when York got word that Henry and Somerset planned to hold a Royal Council at Leicester, made up only of their allies, that would bring charges of treason against him. Along with his allies, who included his wife’s nephew Richard Neville, Earl of Warwick (later known as the Kingmaker), York intercepted the royal party at St Albans.

The Prophecy and Its Outcome

According to the legend, Somerset had received a strange prophecy. The soothsayer Roger Bolinbroke had said of the Duke “Let him shun castles”  ̶  not an easy thing for a mediaeval nobleman.

The battle, which lasted little more than half an hour, was a total victory for the Yorkist cause. Surprised by a ferocious charge by Warwick into the market square, which caught the King’s army completely unprepared, several of Somerset’s key allies were killed and Henry himself wounded and captured.

As for Somerset, perhaps forgetting the prophecy, he took refuge in the Castle Inn, on the corner of what’s now Chequer Street and Victoria Street, where there’s now a blue plaque. Surrounded and desperate, Somerset tried to fight his way out. He charged onto the street and killed four men before he was fatally wounded  ̶  right in front of the Castle.

It seems that Roger Bolinbroke knew what he was talking about.