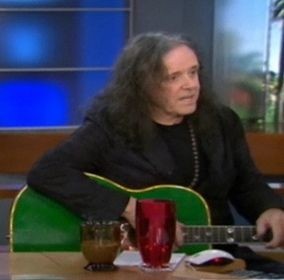 Just over fifty years ago, an eighteen-year-old Hertfordshire singer had his first chart hit. Originally described as the “British Dylan”, he went on to be a pioneer of psychedelic and world music, hobnob with the top people on the Sixties music scene, and share meditation classes with the Beatles. He’s still performing today.

Donovan Philips Leitch (normally known just by his first name) was actually born in Maryhill, Glasgow, on 10th May 1946, but at the age of ten he moved with his family to Little Berkhampsted in Hertfordshire. A restless child, he ran away from home when he was fourteen and, before returning, had found a thrown-away guitar that was good enough for learning to play.

Though he also enjoyed rock music, Donovan gravitated more to the growing folk movement, having grown up listening to the Scottish and Irish folk music his parents played. After a brief stint at art college, he dropped out to explore the thriving folk scene of St Albans, where he learnt the crosspicking guitar technique he later taught to John Lennon.

With a friend from art college, “Gypsy Dave” (sculptor David Mills), Donovan wandered around the country busking, an era he later recalled in songs like To Try for the Sun and Hey Gyp (Dig the Slowness). After gaining a manager in 1964, he appeared on the TV rock show Ready Steady Go, and his debut single, Catch the Wind, was released on 12th March 1965, eventually reaching number 4 in the charts.

Obvious similarities in both music and appearance led the media to call Donovan the “British Dylan”, but although he greatly admired Bob Dylan, Donovan himself put the similarities down to them having similar influences, ranging from American musicians like Woody Guthrie and Rambling Jack Elliott to British artists like Martin Carthy and Bert Jansch. A media-invented rivalry between the two was refuted when they met in Dylan’s London hotel in May that year and struck up a friendship.

Though initially playing acoustic folk and blues, including hits like Colours and a cover of Buffie Saint-Marie’s The Universal Soldier, Donovan began absorbing influences from rock, jazz and world music, producing a series of classic psychedelic tracks like Mellow Yellow, Sunshine Superman, Season of the Witch and The Hurdy-Gurdy Man. Later in the Sixties, influences from India and other world music began to produce an eclectic, mystical sound.

Donovan quickly established himself at the centre of the London scene. He sang backing vocals for the Beatles on Yellow Submarine, was backed on record by musicians like Jimmy Page and John Paul Jones (later of Led Zeppelin) as well as Paul McCartney, and was a close friend of the Rolling Stones’ Brian Jones, whose widow, Linda Lawrence, he later married. Before that, he’d dated Jenny Boyd (the subject of his song Jennifer Juniper) whose sister Pattie was married to both George Harrison and Eric Clapton, inspiring Clapton’s song Layla.

Like most rock musicians of the time, Donovan used some drugs, although not heavily, and was arrested for possession of cannabis in 1966. He subsequently repudiated drug-use, turning instead to mysticism and travelling to India to study under the Maharishi Mahesh Yogi, in the same sessions as the Beatles, Brian Wilson of the Beach Boys and Mia Farrow.

After the Sixties, Donovan dropped out of the limelight somewhat, though he continued to tour and record, as well as appearing in a few films. He’s won many awards, including being inducted into the Rock and Roll Hall of Fame in 2012 and receiving the lifetime award in the BBC Radio 2 Folk Awards, a ceremony attended by his old friend Gypsy Dave.

In 2003, the University of Hertfordshire awarded Donovan an honorary Doctor of Letters – a recognition that, however far he’s travelled, the roots of his career belong to Hertfordshire.

Image above via Creative Commons licence, courtesy of DonovanOfficial.