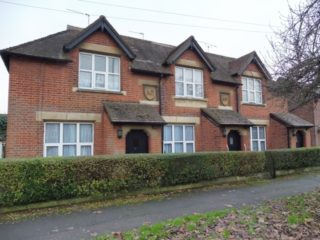 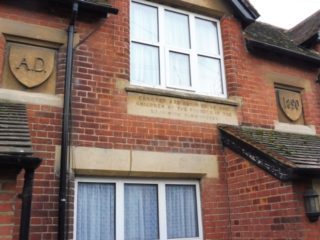 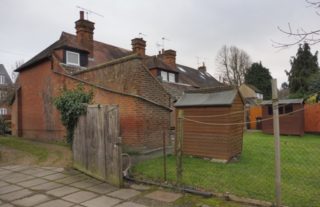 Rear view of the almshouses, as seen from the back yard of Francis Wigg's almshouse. 2017
Colin Wilson 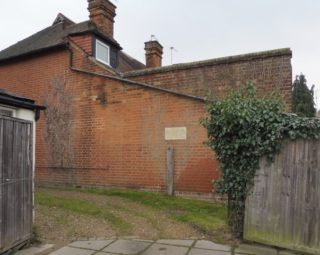 The stone about the pump is above the wooden post, centre of picture. 2017
Colin Wilson 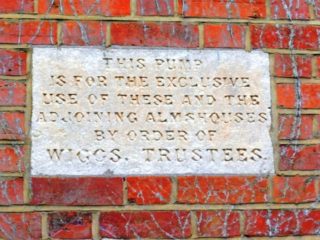 The stone referring to the pump for the Wigg almshouses. 2017
Colin Wilson 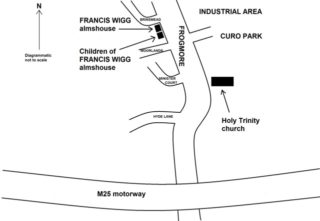 Following in their father’s footsteps, Carr Wigg and Elizabeth Ann Oliver paid for three almshouses. This was in 1890 when the Wigg family sold Frogmore House, just a short distance up the road. Their brother, Francis jnr, is not mentioned.

The site was immediately to the south of and adjoining Francis Wigg’s almshouses, hence they are also known as Frogmore New Almshouses. The almshouses are listed locally but are not included in the Historic England list.

The dedication stone reads, ‘Erected and endowed by the children of the founder of the adjoining almshouses’.

Carr and Elizabeth transferred £2,096 19s. 2d. into 2½% bank annuities to trustees as an endowment fund. Carr added £500 to this fund in 1898 in order to provide an extra weekly allowance for the three inmates. The dividends were sufficient to provide 6s. a week, after allowing for coals and repairs.

The site, with the buildings, was conveyed to trustees by a deed (enrolled) dated 10 March, 1891, upon trusts similar to those of Francis Wigg’s almshouses. The vicar of Holy Trinity church was always to be a trustee. Remember that Holy Trinity had been a parish since 1859.

The three inmates had to be inhabitants of the parish of Holy Trinity, of not less than sixty years of age, frequenting the parish church of Holy Trinity. They were to receive £13 a year and one ton of coal. A pump was available for the sole use of the residents of both groups of almshouses, as noted in the article concerning Francis Wigg’s almshouse.

The charity was still active in June 2018, as confirmed by the Charity. The Charity Commission (ref 238503) states it was up to date as at June 2018, the latest documents being received in October 2017. Its purpose was till to provide accommodation for the elderly, as opposed to other almshouse charities which provided pensions instead. It was not included in the Almshouse Association list supplied in 2016.

Governing documents were an indenture dated 10th March 1891, along with schemes of February 1929 and August 1971.

https://historicengland.org.uk/listing/the-list/list-entry/1347114 is about Frogmore House, Frogmore