Courting at the Odeon 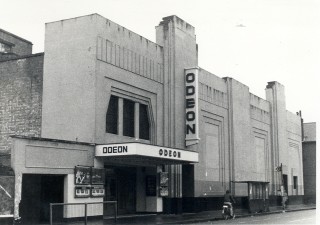 The Odeon filled an important social need. It was a way you met your friends, or if you got a new boyfriend, you made sure the old boyfriend saw you at the pictures with the new one!

I had my first ever kiss at the Odeon. I remember going there to see films often with boyfriends because, you know, if you liked the boy you didn’t have to talk much. We used to hold hands and then at the end of the night you could talk about the film. I took every boyfriend, not that there were many, to go and see films and I remember seeing the Blues Brothers there. I definitely went with my husband, to see Absolute Beginners. That was our first date as well!

Did I go courting at the Odeon? Definitely, on the back row! In every cinema in St Albans in fact!

The first film we saw together was Casablanca, I remember she cried and I thought about putting my arm round her then thought, better not on the first date!

I must admit I went with one boy and we sat in the back row, me the innocent thought I was going to see the film and he, you know, kept getting in the way but I thought, I want to see the film, it’s what I’ve come for!

When I sat in the back row I didn’t see much of the movie. Don’t be silly – we didn’t go there for the films! It was the only way you could, you know, be alone with your fella.

It was a learning curve, that place. I learned everything about girls from it. I used to love B films – you got two films for the price of one. It gave you lots of warm up time to practice your moves on the girls. I definitely learnt a lot of kissing techniques there but don’t tell my wife!

Oh, trying to dodge in the Odeon exits as people left. Taking girlfriends to films and cuddling in the balcony along with scores of other couples. The usherettes and ice cream ladies. Buying cigarettes as a 14 -year old from The Cabin next door.

I did visit the Odeon once at least with my wife Beverly … I’m afraid neither of us can even remember what film we saw, we think it was probably one of the Bond films, not much use for your memories…

As a teenager, I took my two younger brothers to see ‘Lost Horizon’ in 1973, and will forever feel guilty at dragging them out about fifteen minutes into the film. The cause of this hasty exit was two local ‘lads’ coming and sitting next to me, one of whom scared the innocent life out of me by putting his hand on my knee!  I have explained and apologized to my brothers since, but at the time, it was enough for them to see the lovely shade of red on my face for them to know not to ask questions.  What an age of innocence it was.

Another odd occasion was when I came down the stairs to go and see a film at one of the new screens.  Just before I reached the bottom step, an Arab sheik came running up, lifted me into both his arms and whisked me off into one of the projection rooms. I was lost for words and sadly can’t now recall if I was then kissed.

I have no idea why the projectionist would have been dressed like Rudolph Valentino. It may have been a promotion around the time of the release of Ken Russell’s 1977 film biopic ‘Valentino’.  In any case, if ‘My Valentino’ is still out there, or anyone knows who he was, I would love to know what the heck was going on!