You are here: Home>Herts history>Topics>The Word is Hertfordshire!>Thousand years of the written word>15th Century>Register of wills proved at the court of the Archdeacon of St Albans, and the Battle of St Albans, May 1455

Thirty nine names are listed including the Duke of Somerset and the Earl of Northumberland, as well as ordinary people such as Thomas Barker and John Tayllour both of Henley on Thames, and William Boteler who was from a local family, that later owned properties in Hatfield and Watton-at-Stone.[1AR/f79v]
Hertfordshire archive and local studies 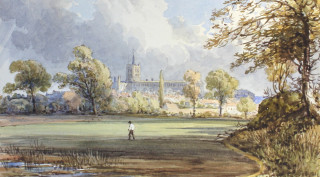 The Abbot of St Albans was one of the most senior abbots in England during the 15th century. He had jurisdiction in religious matters throughout the Archdeaconry of St Albans including the making of wills, which was seen as a Christian duty. This volume records the wills of Hertfordshire people registered in the Archdeacon’s court from 1415-1470. At the same time national events were also impacting on life in St Albans. The Wars of the Roses (1455 to 1487) were a series of civil wars fought in medieval England between the House of Lancaster and the House of York. In 1455 two battles took place locally when there was hand to hand fighting in the area of St Peters Street.

This was not only horrific for local people, but it also made an enormous impression on the Archdeacon’s clerk. At the top of the page he has made a note concerning the battle which took place on 22 May 1455. He has listed the names of the nobility and gentry on both sides of the conflict, the Yorkists and Lancastrians, and those who were killed.