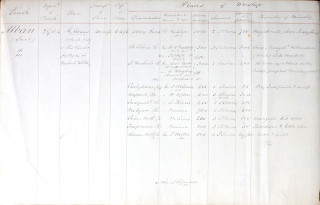 Extract from William Upton's Survey for St Albans: the 'Character of Ministry' at the Presbyterian Chapel is said to be 'Very indefinite and useless' and the Primitive Methodist Chapel is 'Energetic, but wild'.
Hertfordshire Archives [D/EX/812/Q1]

One of the most important sources for the study of religion in the 19th century is the Ecclesiastical Census, carried out by the Government in 1851 to investigate whether there were enough places of worship for the rapidly increasing population, and if they were in the right places. This is invaluable for local and family historians, enabling them to find out what places of worship existed at that time in a local area, and which a family might be most likely to attend.

The census returns can even give an insight into the weather. In Kings Walden, the day of the census (30 March) was reported to be ‘stormy and rainy’ which was why the service was ‘not so well attended as usual by Females’.

Hertfordshire has another fascinating source, which can be compared with the census. In 1847 William Upton (1796-1865), a Baptist minister in St Albans, began compiling his ‘Statistics of the Religious Condition of the County of Hertford’. Upton’s survey was found in a notebook among the records of the United Reformed Church at St Albans Road, Garston, Watford, when it closed, and passed to the United Reformed Church at Chiswell Green, St Albans. In 1990, this fascinating volume was deposited by the Church Treasurer at Hertfordshire Archives.

William Upton included comments on the ministers, based on his conversations with local people, which adds an amusing personal touch to his survey.