Floors from the ancient city of Verulamium 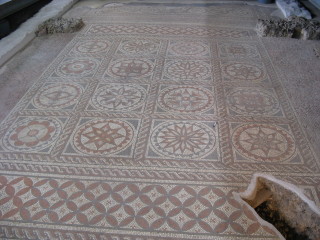 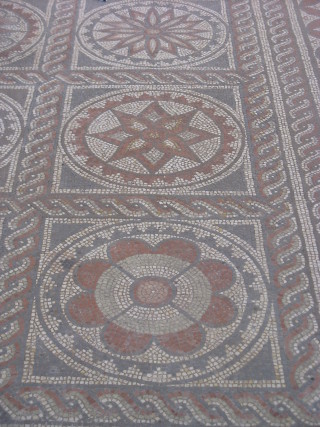 Geometric and 'flower' designs are typical of Verulamium mosaics 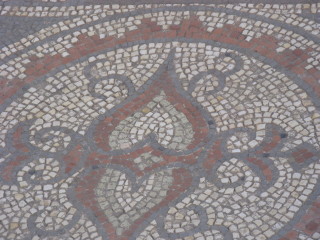 The tiles used to form the mosiac are called 'tesserae' 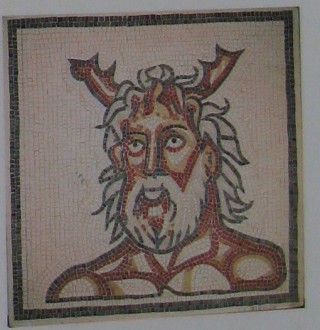 This Roman mosaic, which is preserved in situ just outside St Albans, dates to around AD 180. It is the floor of one of the rooms of a large town house that stood in the Roman city of Verulamium.

At the top of the first photo you can see the remains of two buttresses dividing the room from the next. At the bottom right you can see the coarse concrete foundations, an under-floor heating flue (a large flat brick bridges the top of it) and a layer of lime mortar onto which the mosaic tiles, called tesserae, were laid. It is thought that the 220,000 tesserae in this floor took two seasons to lay. The large red tesserae around the edge of the room are cut from old roof tiles, but the buff, white and grey/black parts of the design are from specially selected stones.

The walls of the room would also have been lavishly decorated with high ceilings and brightly-coloured plastered walls. Wall plaster was not recovered during the excavation of this building but examples from similar buildings show rectangular panels of white and dark red with yellow and black borders and painted decoration. It was a very luxurious room; perhaps the audience chamber of an aristocrat or official.

The house had at least 30 rooms over two storeys. It was one of many large masonry houses in Verulamium at this time, built after a major fire destroyed many of its earlier wooden buildings.

The house had an under-floor heating system called a hypocaust (a Roman word following the Greek: hypo meaning below and caust meaning heat). There was a furnace (accessed from a small roughly built room on the outside of the building) and heat from a wood or charcoal fire passed through an X-shaped pattern of flues beneath the mosaic. The fire was probably kept very low but constant to heat the masonry not just the flues.

This mosaic of a sea god is from the floor of an adjoining room in the same house and is now one of the many beautiful and amazing exhibits in the Verulamium Museum.