You are here: Home>Herts history>Topics>Transport>Railways>Seven railway stations for St Albans

The coming of the railways 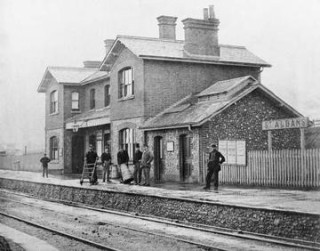 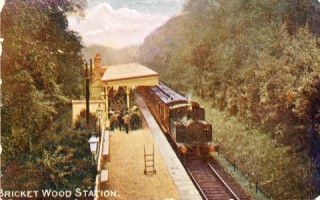 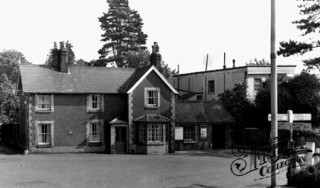 The coming of the railways to St Albans during the 19th century probably caused more change than anything else in the previous 300 years. This new mode of transport caused the stage coach companies to go into decline. The comparative speed of the trains meant that the old coaching inns also went into decline. As a result St Albans gradually became a quiet place.It was many years later before the railways brought more people, prosperity and trade to the city.

The London and North Western

The first railway to cross the county, by way of Bushey, Watford and Tring, was the London to Birmingham (now the West Coast Main Line) in 1837. In later amalgamated with the Grand Junction Railway and the Liverpool and Manchester Railway so that a journey from London to those two towns could be made in a few hours. These three lines became known as the London and North Western. It was the largest railway in Great Britain at that time. As engineering feat go the Tring cutting was a considerable  achievement when the railway navvies had to cut through two and a half miles of chalk with a depth of 60 feet.

The Great Eastern Railway ventured into Hertfordshire in 1840 via Waltham Cross, Broxbourne and Bishops Stortford. It attempted to link up every town and hamlet on the line to Cambridge or Kings Lynn. It ran a very good service but was always short of money.

The Great Northern was built in 1840 and entered Hertfordshire at Barnet and went through to Hatfield. There was a special carriage and engine especially built for the Marquis of Salisbury when he was in residence at Hatfield House. The line went northward to the the Digswell viaduct with its 40 arches, and then on to Hitchin.

The Midland Railway’s headquarters was at Derby and, in contrast to the other railways, the Midland came through Hertfordshire from the north. The line entered the county from the north via Harpenden, St Albans, Radlett and Elstree in around 1868. During the previous ten years it had crossed the county on Great Northern lines. The trains ran from Bedford to Hitchin and then on to King’s Cross. When the Midland finally reached St Pancras the price of coal in London had dropped to 17 shillings a ton. The opening of this line also enabled hats made in St Albans and Luton to be trimmed and finished in Manchester. The present day line is known as the “Bed-Pan” line.

The Metropolitan Railway just crossed the county at Rickmansworth and Chorley Wood on its way to Aylesbury. This line was built in 1892 and from 1899 the Great Central railway company used this line on its way to Marylebone.

As for St Albans, the first railway to reach the town was the London and North Western in 1855. A branch line was extended from Watford, via Bricket Wood and Park Street to the Abbey Station. The train is locally known as “The Abbey Flyer”.

The Hatfield and St Albans

Seven years later 1862 the Hatfield and St Albans Railway Company was formed and a line was built from the Abbey Station, to London Road, a halt at Sanders,the orchid growers, Hill End, Smallford, Nast Hyde and on to Hatfield.

From 1862 it could be said that with St Albans Abbey, Park Street, Bricket Wood, London Road, Hill End, Smallford and the City Station. St Albans once had as many as seven railway stations.

There were also numerous lines across the county that connected Hemel Hempstead and Redbourn to Harpenden and then Harpenden to Wheathampstead, then on to Welwyn Garden City and on to Hertford. A loop line ran from Stevenage via Hertford to London and another line ran north to Buntingford.