No women allowed by order

A tour around the Benedictine monastery of St Albans 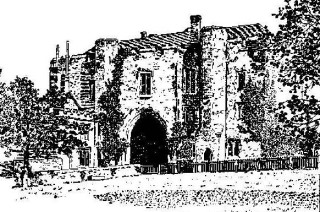 The Great Gateway. Where the tour begins

On the southern side of the Abbey at St Albans there is a gentle slope which runs down to the River Ver. It is such an ideal setting for the Cathedral that visitors might find it difficult to picture the upper part of the slope filled with a great cluster of buildings. Even though most of them have disappeared long ago they formed an important part of the story of St Albans over a period of centuries.

It is said that the Saxon Abbey of St Alban was founded in 793 AD by Offa, King of Mercia. Until the Norman Conquest there was very little addition to the original church. However, the Saxon building did not satisfy the Normans. The first Norman Abbot Paul de Caen rebuilt the church and the monastery buildings, except for the bakehouse and the buttery. These buildings were found to be in good order. For the following 400 years, as finances allowed, building and rebuilding took place.

Many years’ work on extending the west end of the church was completed in 1213 just before the Magna Carta assembly was held. Following the pillaging after the second Battle of St Albans the Abbey had to be repaired. St Albans Abbey was the premier abbey in England and in the 13th century 100 monks as well as lay people lived here.

From the earliest days there must have been a boundary round the monastery, but it was not until 1357 that King Edward III granted leave for a stone wall to enclose the Abbey. There were no stone quarries in the area and so the buildings were constructed from stone, brick, tiles and even wood taken from the ruins of Roman Verulamium.

The area contained with the wall went from behind the houses at the south of High Street and George Street to almost down to the river. The wall also went from Holywell Hill to a little west of Abbey Mill Lane. There were numerous gateways at various intervals along the wall.

The Great Gateway, which still stands today, was built in 1362. The Water Gate was to the west, while the Derne Gate, Almoner’s Gate and Holywell Gate were to the south. To the east was the tradesmen’s entrance: Sumpter Yard. This was a rectangular space for unloading goods. In the High Street stands part of the Waxhouse Gate which was built in 1420.

Before we start the tour it is worth pointing out that all Benedictine abbeys had much the same plan, as excavations elsewhere show. From this we can tell where and what those buildings were.

We begin the tour by going through the Great Gateway. One would have seen a long house where the stores were kept. To the right were the almonry building, stables for around 300 horses and, down the hill, Water Gate.

In this courtyard was a well, and frequent assemblies were held here for the tennants of the Abbey to pay their dues. To the left one would have seen a guest house. There would have been a very large hall with a double roof and a lavish bed-chamber for the important guests. This hall was built by Geoffrey de Gorham (1119-1146). Close by was the Abbot’s Lodging which adjoined the nave of the church.

The remains of the monastery’s cloister, which was attached to the nave and the south transept, can still be seen in the outer walls of the church. And some of the glass in the north transept is thought to have come from the cloister windows of Abbot Thomas de la Mare (1349-1396).

The refectory and dormitory

On the south side of the cloister was the refectory, with a dais for the Abbot and his important guests and a high place from which a monk would read during meals. Further down the slope was a court and a gallery with quarters for visiting monks, a tailors room and other workshops.

Beyond the refectory and the gallery was the monks dormitory. The ground floor was an undercroft, which was used as a store, and the upper floor was one large hall.

It is said that the chapter house, planned and built by Paul de Caen and reconstructed by Robert de Gorham (1151-1156), was magnificent in design. It had delicately carved stone seats at the sides from which the officials of the Abbey conducted their business.

Almost halfway between the church and the Holywell Gate was the infirmary and its chapel. After the final service of each day (7pm), complete silence had to be kept in the infirmary, as it was where the sick monks who had served for over 50 years lived.

The end of the Abbey

On December th 1539 the Abbey was surrendered to King Henry VIII and the monks were given a pension. Sir Richard Lee was granted the buildings and by 1556 he had demolished them except for the stables. It was a further 200 years before stables were also demolished leaving just the church and the Great Gateway.