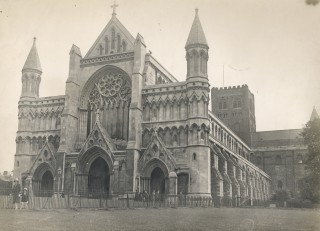 St. Albans Cathedral, the site of his execution, where resides his shrine
Hertfordshire Archives and Local Studies

He was born in Verulamium, and was decapitated as a martyr on a hill above that very same town. He wasn’t just any martyr, however. He was the first British Christian martyr, and has thus been suggested by some as a replacement for St. George as England’s patron saint, or even as a patron saint of Britain as a whole. His name was Alban.

He spent his whole life in the Roman town now named St. Albans in his honour. A pagan originally, he converted to Christianity when sheltering a Christian priest in his home, who baptised him. When Roman soldiers came looking for the priest, Alban exchanged cloaks with him and was arrested in his stead, on Chantry Island. The magistrate he was brought before was incensed at such deception, and gave the order that Alban suffer the penalty due to the priest, if he had indeed become a Christian. Alban declared: “I worship and adore the true and living God who created all things.” St. Alban was eventually sacrificed to the Roman gods; he was taken out of the town, across the River Ver, to the top of the hill opposite, and killed on the 22nd of June – though there is much dispute over the year, with estimates ranging from 209 to 304 A.D. The alleged place of his beheading is where St. Albans Cathedral now stands.

In 2002, a scapula (shoulder blade) which was believed to be a relic of the great protomartyr was presented to the Cathedral and placed inside the saint’s restored 13th Century shrine, where it still rests. The legend of his incredible sacrifice lives on and is revered to this day.