The second longest cathedral in the United Kingdom. 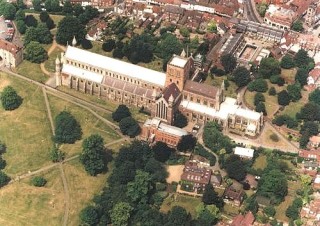 The abbey from the air

I visited the Cathedral a few years a go as part of a school trip and have since done some research into its history. This included how it became to be called St Albans.

The name originated from the story of a man, Alban, who lived in the area, during roman times, and was executed when trying to protect a local priest. He was beheaded and where his head dropped is where the Cathedral is said to have been built.

During the tour the history of the architecture and its development as a building was explained to us. The earliest foundations of the building have been shown to be of Saxon origin in the 8th century. The Normans then developed the Abbey further and as time passed and trends changed a lot of additions were made. However, the Cathedral still contains a lot of its traditional Norman design. It changed from an Abbey to a Cathedral in 1877 and is the second longest Cathedral in the United Kingdom.