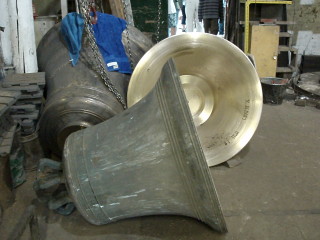 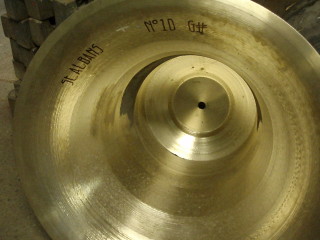 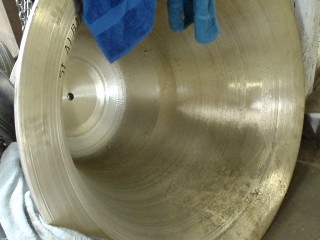 One of the larger bells
Jill Rudd 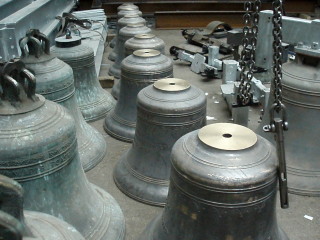 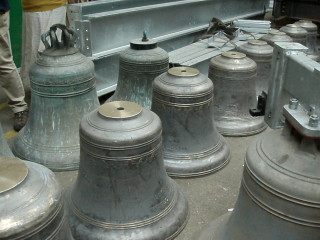 Another photo of the eight
Jill Rudd 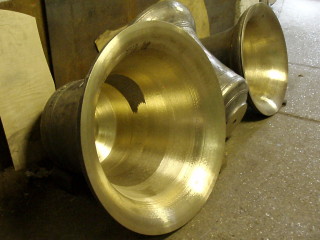 During 2010 the bells at St Albans Cathedral were replaced. The project had been 40 years in gestation. Here are some of the reasons why and some pictures of the new set of thirteen bells when they were at Whitechapel.

The bells themselves no longer gave a good peal in E flat, they had deteriorated slowly over time. The bell ropes were increasingly difficult to pull and correspondingly the bells more difficult to ring. The bell frame needed restorative work and improvements needed to be made within the bell ringing chamber.

The project would ensure St Albans Cathedral has a bell ringing facility that will match those of other catherals.

In addition to the bells the Cathedral took the opportunity to make some health and safety improvements in the tower, principally, installing emergency lighting on the stairway, making sure the doors fitted and closed properly, installing a fire detection system within the bellfry and some repairs to the tower roof.

An outline summary of the project is as follows:

Dispose of the fittings and old steel framework as scrap

Design and construct a steel bell-frame to house the eight larger bells, to become static chime bells for the carillon and the clock, in the SE quadrant of the Belfry to stand on the belfry floor

Install a new electronic control box for the carillon, to replace the existing mechanical linkage system

Renovate and refurbish as necessary the existing timber bell-frame

Make up all new fastenings for replacing the existing fastenings within the timber bell–frame, as well as new pit end bracings to replace those removed in 1935.

Install the new ring of 13 bells – five into the new upper steel bell-frame and eight into the existing timber bell-frame.

The casting of the new bells began in January at the Whitechapel Bell Foundry in London; the photos were taken in February 2010 by Tewin bell ringer Jill Rudd whilst on an organised tour of the foundry.

The thirteen bells were each named by the Cathedral and was sponsered through donations by groups or individuals. Each donor asked that their bell be inscribed with a personal message or motto.

The names on the bells are in latin with Albanus being the tenor and the rest being given an apostles name.

According to custom, bells are consecrated by the bishop of the diocese, so on Saturday 4th September 2010, a celebratory service was held at the Abbey.

The thirteen bells arrived days before and the bells were lined up down the centre of the nave. Bishop Alan sprinkled the bells with holy water, anointed them with oil and asked each donor “what name does this bell bear” finally the bells were incensed.

In October the bells were hoisted into the Norman tower of St Albans Abbey.