A history of senior football in St Albans - Part 8

The next golden era 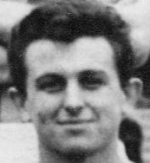 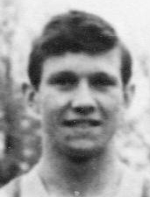 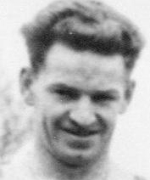 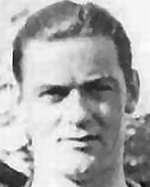 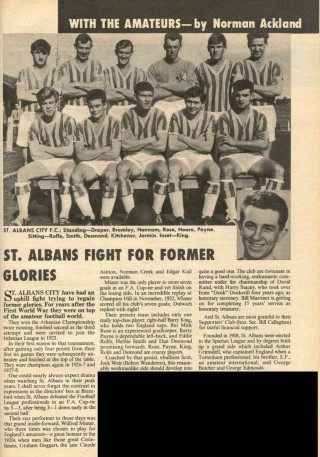 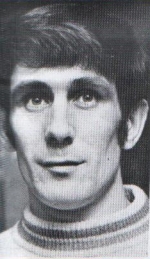 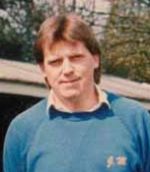 When the 1950s drew to a close St Albans City Football Club was a mid-table side. Players from this period included Danny Desmond, a forward who was signed from Hitchin Town and Clive Greenwood. Eddie Rolfe and Barry King were half backs or midfielders as they are known today. As the 1960s began another player made his debut. Phil Wood was a central defender who began an amazing career which ended in 1985.

It was in the 1967-68 season which began the new golden era for St Albans. A new manager was appointed by the name of Sid Prosser. He was an Arsenal junior player whose career was cut short through injury. He had already managed Finchley for a couple of seasons. In his first season he guided the Saints to sixth place in the league. Their highest position since 1954-55. He adopted a ‘squad’ system in which players were able to play in two or three different positions when called upon.

In the 1968-69 season the Saints embarked on an FA Cup run which saw them reach the 2nd Round Proper and a home tie with Walsall. In the match City fought out a gritty 1-1 draw but when they went to Walsall for the replay they lost 1-3. Even though they had outplayed Walsall for most of the match (I saw it because I was there). Walsall were drawn at home to Tottenham Hotspur in the 3rd Round. If only.

In the 1969-70 season another Cup run took place. This time it was the FA Amateur Cup. The Saints reached the semi-finals for the fourth time in their history. The opposition was Dagenham, forerunners of todays Dagenham & Redbridge team. The tie was played at The Den, home of Millwall Football Club. The team battled for a 1-1 draw with Bobby Childs scoring for City. In the replay at Luton Town’s Kenilworth Road ground City narrowly lost 1-2 with Bobby Childs scoring yet again. It seemed that City would never ever reach an FA Amateur Cup Final.

Third place in the league

In the 1970-71 season the club finished in third place in the league wth only Sutton United and Wycombe Wanderers above them. This was their highest league position since the runners up season of 1954-55. A notable player from this season was John Mitchell. He was a forward who had signed from Hertford Town. After a few games it was clear that he was ‘something special’. Eventually he signed for Fulham. He went on to play for Fulham against West Ham United in the FA Cup Final in 1975. He later played for Millwall until injury ended his career.

Towards the end of the 1971-72 season there was a falling out between Sid Prosser and the club committee which resulted in Prosser leaving the club. He went on to manage Wealdstone. This basically meant that the golden era was at an end. For the next few seasons the clubs form dropped considerably.