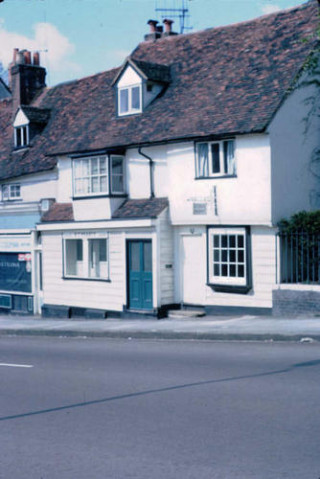 Travellers of the time came to the conclusion that “St Albans was a most attractive place to visit that was set in pleasant rural scenery”.

From a map drawn in that year it is possible to see that it was a little place. Only nine streets comprised the town. St Peter’s Street, Market Place, Chequer Street ,High Street and George Street were in the centre of the town. Holywell Hill, Sopwell Lane Fishpool Street and St Michaels Street were on the way out of the centre in different directions. These streets, plus a few byways, contained around 300 houses and a population of around 3,000 people.

The ancient town’s markets and fairs attracted people from the nearby villages. It was also a coach posting station. Early in the 19th century St Albans was full of inns to cater for the many travellers who passed through. This was the first stopping place of any importance on the north west road from London. A great number of coaches, some say as many as 70, clattered into the town, rested briefly, and then rumbled on again with their passengers refreshed. The “Royal Mail” covered the 20 miles to London in one hour and 54 minutes. Other coaches included “Triumph”, “Emerald” and “Umpire” who took rather longer.

The inns did not only depend on travellers, for there was very little amusement in the town, and it was the habit of shopkeepers and professional men to gather in the smoking rooms of the taverns to exchange the day’s news. Many of the inns had separate places of refreshment in their yards called “taps” and there the ostlers and working men gathered. Not only was there talk of St Albans but news from London and the north west.

The Goat Hotel in Sopwell Lane was a favourite place for the local tradesmen. In Holywell Hill was the Crown Inn which was patronised by the sporting men. Further up Holywell Hill was the Saracen’s Head, The Dolphin, The White Hart and the Peahen. Only the last two named remain but the gateways to the yards show us where the other inns used to be also. These yards were once the scenes of feverish activity when the coaches arrived and the horses were changed.

Across the road were The Postboy and the Trumpet Inns. The Holywell Hill inns were mainly for the long distance travellers. These provided warmth, sleeping accommodation,drink and food. In St Peter’s Street the inns were for the refreshment of buyers and sellers of cattle and grain on market and fair days.

The three fairs held in the town were a great attraction. One was on Lady Day (March 25th) another for cattle and horses on St Albans Day (June 17th) and the most important fair was at Michaelmas (September 29th). The September Statute fair was where the farmers hired men and maidservants for the following year among those who stood in the market square. This sounds a little like a slave market but it does not seem to have been regarded as such. Young men would wear in their hats a sign of their craft. A piece of whipcord for a ploughman,wool for a shepherd, cowhair for a stockman and so on. If they had been happy for the previous year then they rehired themselves to the same farmer. If not, then here was a chance to make a change.

One shilling was paid on hiring and young men were paid from 11 shillings to around 13 shillings a week. They would sleep at the farm but buy their own food. At the end of the year £2 was paid. Different arrangements were made in other parts of the country.

The young men and women, free from a year’s hiring and with money in their pockets, came to the “Statty” as the Statute fair was called, prepared to enjoy themslves. Amid the business of buying and sellng farm produce St Peter’s Street was full of stalls and entertainment. Gingerbread, stewed pears and other delicacies and a great variety of goods were noisily offered.

The entertainment usually featured a kind of street theatre with minstrels and other musicians, jugglers, tumblers and other circus acts. There were early forms of puppet shows to entertain the children.