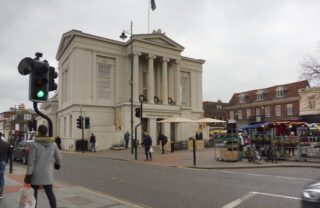 St Albans Museum. The foyer is the site of Clarke's almshouse. Note the building with three dormers in the background. Dec 2018
Colin Wilson 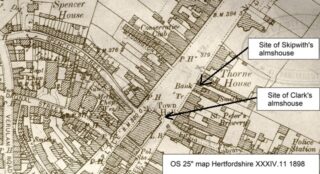 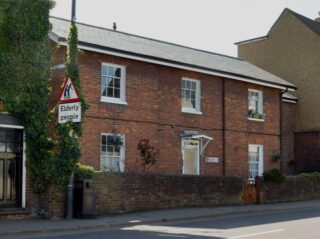 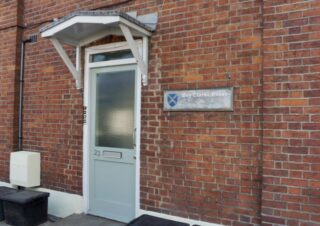 The nameboard on May Clarke House. Apr 2017
Colin Wilson

In the early 17th century Beech Farm was held by John Clark. In 1605, just 2 years after James I came to the throne, he provided some almshouses in the centre of St Albans. They were for 6 widows under one roof on the site of the moot house, provided by the Corporation. Three widows were to be from St Peters parish and three from the Abbey parish. Note this was not the building now known as the Moot House.  John died in 1624/5.

It may be that the original chimneys were wood as information from 1651 mentions that 3 almshouses were to be new built with brick chimneys. It is not certain if this refers to Clarke’s or some other building.

A 1745 trust deed citing John Clark the Elder as well as John Clark the grandfather required that 24s. was to be divided among the widows, and that the almshouses should be sufficiently repaired, maintained and upheld.

A drawing from the early 19th century, held at St Albans museum, shows the site to be open and idyllic, but that was probably not the case on market days with the aroma of livestock. There were other premises and businesses behind the almshouses. Of interest is the information that the sign was for the White Hart.

By 1829 the Town Council wanted a site for a new Town Hall and court house, for which the almshouse site was chosen along with adjoining buildings. It is now St Albans Museum.

New premises were provided in Catherine Lane (later renamed Catherine Street). The new building is May Clarke House. It is the only remaining Victorian building on the road. While the building exists, its used as an almshouse ceased during World War II. By 1939 it seems there were only 2 residents. One other woman had her furniture there but had probably moved. The almshouse debt in 1940 was estimated at £170, so consideration was given to boarding up the premises. Plans were drawn up for sale by auction in 1941 with a provisional reserve price of £580. It appears that after the buildings were sold, a pension charity was instituted to provide support for the poor of the district.

Little information about provision for the residents has been found. By 1900 it was noted there was no endowment. Horatio Dudding (the vicar of St Peter’s) retired in 1892 and money was reserved to pay them 1s a week. They received other gifts, as well as parish relief.

1872 saw the resolution of an anomaly. The Abbey had nomination rights to Catherine Lane (in St Peter’s) while St Peter’s nominated those in Raynshaw’s almshouse (in the Abbey parish). The trustees agreed that it was more logical for each parish to nominate for their own area.

We rarely learn about the interiors of buildings. In 1887 the Council thought the churchwardens of St Peter’s managed the almshouses, but were not sure who owned them. The buildings then were in good condition, but closet accommodation was defective, with no connection to the sewer. The Council considered taking ownership if they carried out repairs.

The time of Queen Victoria’s diamond jubilee evoked charitable works. Three honorary architects produced a report. An 1899 newspaper report reads, ‘There were six rooms, each woman having a room about 12ft square. The buildings were comparatively modern but were not in good repair. Eaves, gutters, downpipes, butts for storing rain water and alterations to the grounds and paths were absolutely necessary. Small ranges, general repairs, cleansing and painting were required. The stairs to the upper dwellings were very steep and there were four winding steps in the turn of each staircase, there being danger as well as difficulty in the ascent. If the three staircases were swept away and one suitable staircase, with easy steps in two flights, was put in to serve the three upper rooms, a great improvement would be effected  …… The roof has been thoroughly overhauled and the whole place has been generally repaired’.

As an aside, modern photos for this article were not easy. The town hall / market area is usually busy, and for some time the town hall was covered in unsightly scaffolding. Just as I was ready to photograph May Clarke House, a car transporter parked in front, ready to unload a delivery. An hour and a coffee later, the transporter had left, but had to to find spaces between queuing rush hour cars.

Town Centre housing for the needy, by Judy Faraday & G.P.McSweeney

Documents held at HALS. Only a few consulted for this article

SBR????? 1607 – 1831. Deeds relating to the site on which the Present Town Hall stands, late Clarks Almshouse. Deeds, abstracts of titles, mortgages and copies of the Act of Parliament. Plans of site and site of new almshouses missing

SBR/1488 (22 Jan 1745). Deed of Trust relating to almshouses opposite the water cistern in Saint Peters Street in St Albans and a Blacksmith’s Shop in the possession of Richard King the Elder

SBR/1505  28 Jul 1780 – 29 Jul 1780 Lease and release of messuage and slaughterhouse, and other property including messuage adjoining Clarks almshouses

SBR/1507  12 Sep 1787 ·Deed of Trust regarding almshouses, and also land upon which a blacksmith’s shop stood

SBR/1509  24 Dec 1790 – 25 Dec 1790. Attested copy of lease and release of messuages in St Peters Street and land belonging to the almshouses. Made between 1) William Glover of London, auctioneer, and Thomas House of St Albans, hopseller, and 2) Robert Nicholls of St Albans, auctioneer

SBR/1522  (11 Jul 1829). Agreement as to exchange of Clark’s Almshouses made between John Samuel Story and the Town Committee

SBR/1517  (1829). Abstract of Title to almshouses in St Peters Street, and to messuage belonging thereto. Refers to deeds dated 1605 onwards

SBR/1582  28 Feb 1831. Conveyance made between John Newball Baron esq and the Mayor, etc, of land in St Peters Street belonging to the almshouses. With small coloured plan.

https://historicengland.org.uk/listing/the-list/list-entry/1103069 is the Moot Hall

Newspapers. These can be accessed on the British Newspaper Archive website

Herts Advertiser 01 July 1899 page 8 col 6 Refers to a print which shows old timbered almshouse for “three poor widows, the site which was previously a hostelry”

Herts Advertiser 19 April 1873 page 5 col 5. Abbey vestry unanimously resolved that the vestry agree to the arrangement proposed by St Peter’s parish, and recommend the trustees of Rainshaw’s charity to do the same.

Herts Advertiser 06 August 1887 page 6 col 1 [Town Council meeting re health and drains] Defective closet accommodation, unconnected with the sewers. lt was mentioned that the almshouses were managed by the churchwardens of St Peter’s. Maybe Council could take possession if they do repairs. Buildings good condition]

Herts Advertiser 07 May 1892 page 5 col 2. Resume of Horatio Dudding’s life on occasion of his departure.

Herts & Cambs Reporter 13 May 1892 page 6 col 6 if more money was raised and it was applied to the endowment of the almshouses in Catherine Lane, [Dudding] would himself subscribe £lOO.

Herts Advertiser 19 November 1892 page 5 … he remarked that he was present when the foundation stone was laid of the Town Hall. The site used to be occupied by some almshouses and blacksmith’s shop, while in front there was a pond.

Herts Advertiser 11 June 1898 page 6 col 2. The ancient almshouses of the city should be repaired….

Herts Advertiser 11 June 1898 page 4 col 5-6. The Committee are able to devote increased attention to the houses in Catherine Lane. At present the Committee have a capital of £323 but more will in due time be received

Herts Advertiser 06 July 1901 page 5 col 5. Completion of repairs to a number of almshouses.