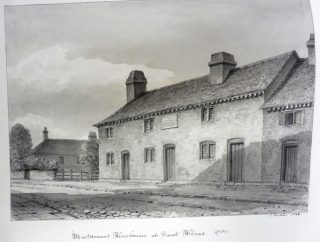 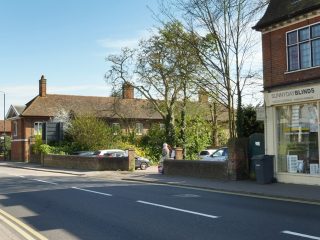 The site of Masterman's almshouse was a car park in April 2017. The Marlborough almshouses can be seen in the background.
Colin Wilson

Clutterbuck refers to ‘three other houses in Cock Lane …… forming 6 dwellings on the front of which is the following inscription, ‘1781 These six dwellings for the poor of this Parish were built and finished at the sole charge and expence of John Masterman, of London, goldsmith, in lieu of three old ones which stood in the street opposite the White Horse but now conveyed to him by the unanimous consent of vestries held 28 March 1780 and 6 June 1781′. Cock Lane was later renamed Hatfield Road.

The three old almshouses were those originally bequeathed by William Skipwith in 1509 and later adopted by the Vestry. Masterman had acquired the site subject to certain conditions, particularly that he was to pay for the demolition and was not allowed to keep any of the materials.

The new almshouses were quite plain according to Buckler’s drawing. They were next to the far more elaborate Duchess of Marlborough almshouses which had been erected 45 years earlier.

I have so far found no definite information as to when these almshouses ceased to exist. They were drawn by Buckler in about 1832 (50 years after they were built). The Family and Community Historical Research Society notes the last record found was 1850. They are not shown on the OS map for 1897, though the St Peter’s Road almshouses opposite are shown. They are not mentioned in Victoria County History.

The History & Antiquities of the County of Hertford, by Robert Clutterbuck
p123
Printed by and for John Bowyer Nichols, 25 Parliament Street, London. 1827