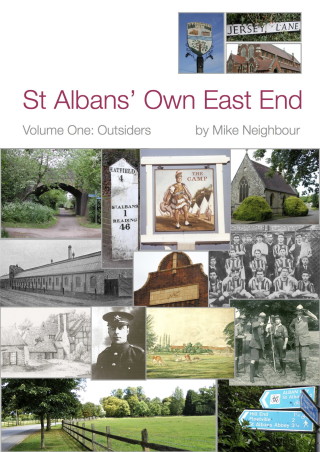 The boundary of St Albans managed to remain largely within the medieval Tonman Ditch until the middle of the 19th century. Then, on the east side, a flurry of development enabled residents to live in New Town, St Peter’s Park and Bedford Park. The arrival of the Midland Railway in the 1860s stimulated further housing east of the tracks, in the area of Granville Road.

In time, the land further eastwards became more profitable for the growing of homes than wheat or cows. By the first world war fields had become roads – albeit, muddy ones – all the way to Beaumont Avenue, and from Sandpit Lane to Camp Road. Later estate sales enabled the residential areas of Marshalswick and Mile House to proceed, as well as additional development in the hamlets beyond.

St Albans’ Own East End, Volume 1, Outsiders, is the first of a two-volume story about the eastern districts of St Albans from the early years of the first millennium, through to 1930. Theme chapters about the farms and manors, roads and railways, serve as a backdrop to the detailed coverage of life in the east end from 1880 onwards, in a series of annual chapters, which present the places, events and people, mainly as recorded through the pages of the Herts Advertiser.  The history will be extended to 1960 and beyond in Volume 2: Insiders, which will be published in March 2013.

Additional special features are included with some of the chapters; while St Albans’ Own East End Through 100 Objects is a recurring theme throughout both volumes.