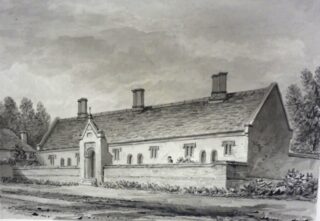 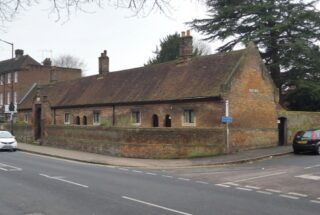 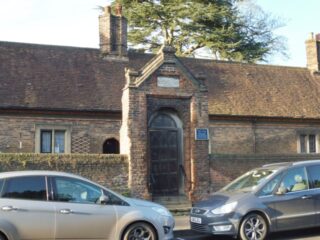 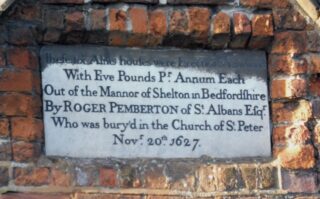 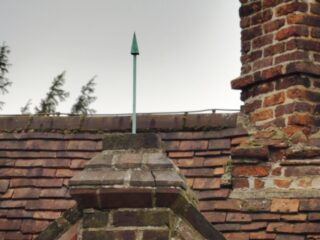 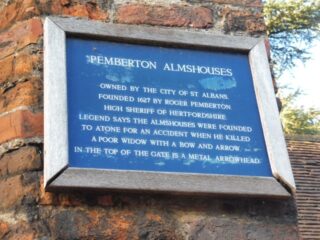 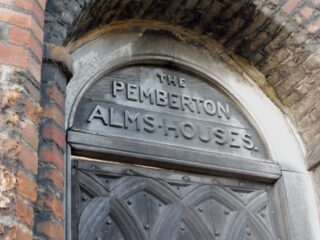 The door to the Pemberton almshouses. Feb 2017
Colin Wilson

We all like a good anecdote whether it’s true or not. The story behind Roger Pemberton’s almshouse is that he killed a woman by accident, so built the almshouses as a sort of atonement. To remind people of this there is an arrow above the gateway. The story may be fiction, but no other explanation has been offered. An 1887 newspaper article suggests the original finial over the gate was a ball and spike, the arrow being fitted later.

Sir Roger died in 1627, just 2 years after Charles I came to the throne, at the age of 72. Hence much of his life was in the uncertain times of Elizabeth and James I. He planned for the almshouses shortly before his death but did not live to see them built. They had their first occupants in 1629. As his two elder sons had moved away, it was Roger’s widow and his youngest son Raphe who arranged matters. originally Roger’s wife and sons had the right to choose residents.

Comments have been made about the similarities with the Saunders almshouses in Flamstead, built 40 years later. Pictures and drawings show the frontage has been hardly altered over the years. There are garden plots at the rear.

Land was purchased so that rental income would provide for the buildings and the occupants. One uncommon but sensible rule was that a dwelling would not be occupied for three months after the death of the resident, the rental income allowing for any refurbishment or repairs. Interestingly a similar rule was used at the Saunders almshouse.

1888 possible demolition. Of course, any building requires major upkeep at times, and these are nigh on 400 years old. In 1888 it was suggested it would be better to shut them down than to leave the residents as they were. The person responsible for paying annuities had always declared himself penniless. Alternatively, new almshouses could be built on the land behind.

Victoria’s golden jubilee spawned many charitable activities. The St Albans almshouses were to be repaired. Willoughby Pemberton offered to pay for the Pemberton almshouses, freeing up more funds for the other Raynshaw and Clarke’s almshouses. His contribution may have amounted to about £1400. A Herts Advertiser article goes into great detail about the state of the building. ‘There were six rooms, each woman having one room. In situation, size of rooms and surroundings the Almshouses were all that could be desired. They were, however, much out of repair. Pieces of the walls of the buildings should be rebuilt, a gable tied in, and other portions of the walls should be repaired and repointed. The laths for the roof tiling were in a very poor condition: the roof tiling should be stripped off and the whole should be tiled afresh. In order to rectify the dampness of the rooms, where the earth outside was above the floor level, damp-resisting coatings should be put, the flank walls of the end houses should be cemented internally, and cement dados about three feet high should be put internally elsewhere. Small ranges should be put in where they were not provided at present: general repairs should be done throughout and the boundary enclosures should be repaired….. Sinks and water supply have been built at the back of the rooms, together with a place for storing fuel’. It should be added that three local architects gave their services freely.

Later Improvements
It appears that Willoughby Pemberton paid for further work in 1905.

The next reprieve came in 1929. The area was due for redevelopment, but the almshouses were saved by the Council due to their historic interest.

By 1942 the almshouses were again in a poor state of repair. They were sold to St Albans Council in June 1944. One suggestion was for them to become a museum, but they became part of the Council’s housing stock for retired persons.  The Pemberton Almshouses were purchased by the Council in 1944. The St Albans records detail work required. In 1960 extensions were added at the rear of the building to provide a kitchen and bathroom for each resident. It is no surprise that they were listed grade II in 1950, ref 1347160.

The original occupants were to be six poor widows of good character, not less than 60 years old, unable to provide for themselves through their own exertions (health etc), but had not received poor relief in the three preceding years. Preference was given to those who had been reduced by misfortune from better circumstances (in other words, not habitual paupers or undeserving poor). Two were chosen from the parish of St. Peter, two from St. Stephen’s, one from St. Michael’s, and one from the parish of Shenley. They had to attend church, but that was only across the road. They had to live in peace together. Failure to do so could result in loss of allowances for six months or possibly eviction. A fifth of their allowances was reserved for clothing, the rest for food and living costs. Under the 1884 Charity Commission scheme the vicar and churchwardens of St Peter’s were the trustees. The age limit was later reduced to fifty-five. In order to comply with the Sex Discrimination Act men are now admitted.

St Peter’s Church Charities minute books 1939 – 1972  provide some details about later financial matters.
Jul 6 1939 There was a query about payments to the Pemberton almshouses. The rent charge was payable elsewhere according to the will, so proof of identity was required. As all charities were included in the same bank account, those in surplus effectively acted as surety for those in deficit.
Jul 15 1939 Some charities were carrying large deficits. Pemberton almshouses were of the greatest concern as there was no income.
[7 March 1940] A special meeting was held to discuss the Pemberton almshouses as there were no funds. Grants had been obtained from the Poor Fund and bolstered by other charities. It looked as if the sale of the property was the only solution. The interest on the money raised could be used for pensions. The local Council may be interested in purchase as the building was of local interest. One possible use was for a museum.
7 Mar 1940 The parishes of Shenley, St Michael and St Peter’s had interests in the almshouses.
7 Jun 1940 The almshouse debt now stood at £170.
15 Apr 1941 The Charities Commission said they were custodians while the trustees were the owners, so the Pemberton property could be sold. Alternative accommodation must be provided for the inmates and a pension charity instituted. A provisional reserve auction price was £5000, far more than the other almshouses.
14 Jul 1942 Roger Pemberton Almshouse & Others is the new combined charity.
21 Nov 1947 the Chairman said there was a great need for almshouses for the elderly so it was inadvisable to sell any more.

While they may no longer be defined as almshouses, they do have a use associated with their original intention.

The Victoria County History of the County of Hertford, Ed William Page
Issued Archibald Constable & Co. 1908. Reprint by Dawsons of Pall Mall 1971 ISBN 0 7129 0476 X
Vol 2 pages 131, 472. For some reason the Pemberton almshouses do not appear to be mentioned in the charities section.
This publication is available online at http://www.british-history.ac.uk/vch/herts/vol2/pp424-432 and http://www.british-history.ac.uk/vch/herts/vol2/pp469-477

St Albans Museum has a few photographs. The most useful is an etching in brown ink by Victoria Hine (worked c 1850 -90) of the entrance to Pemberton Almshouses. It shows the level of the pavement was higher than today. Accession No 1982.2175

Newspapers These articles can be accessed on the British Newspaper Archive website. Other articles of little consequence have been omitted.