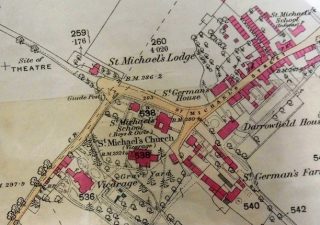 View along St Michael's Street, as seen from opposite St Michael's School. The Rose and Crown is in the far distance, while the Six bells is in the centre of the picture. Aug 2020
Colin Wilson

Harriot Grimston married Major Poore at St Albans Abbey in March 1885.  The Grimston family was prominent in the area. The head was entitled the Earl of Verulam and the family seat was at Gorhambury House. Harriot was the 3rd Earl’s eldest daughter. A newspaper article noted that Harriot had made herself popular by many benevolent acts in the area, particularly in St Michael’s.

A newspaper report describes the wedding procession route, in sequence, from the Abbey, passing through the town before heading to Gorhambury. At the end it passed St Michael’s almshouses. Like many other properties they were decorated in celebration. The almshouses had a banner suspended, having on one side the words, ‘Health and Happiness’, and on the other, ‘Prosperity’.

That passing reference is unfortunately the only information which has so far come to light. The OS maps of the time or the next few decades do not annotate any buildings in the area as almshouses, but not all almshouses are noted on the maps. The biggest clue is that the procession passed the Rose and Crown, a pub dating back to 1538. The almshouses were mentioned after the pub;  the route subsequently turns right along St Michael’s Street and Gorhambury Drive. Maybe one of the existing buildings was used as an almshouse, but again no suitable reference has been found.

The Six Bells today has a long annexe which looks something like the traditional almshouse building. However, an 1898 sketch by Holman Winter held at St Albans Museum indicates that only part of the building existed then. Equally, there is actually no such thing as a typical almshouse building.

Another possibility is the building shown between St Michael’s School and The Lodge. It is now between the school and Bluehouse Hill. Plot 538 is recorded as occupied by the Earl of Verulam in the 1843 tithe maps (assuming 538 on the OS map is the plot number). If nothing else the building does not look unsutable as an almshouse.

Sadly the wishes on the banners did not materialise. Harriot died at Eastney in August 1888 aged just 43. Her death notice was printed in Hertfordshire Almanac Jan 1889 p 157. Death and funeral notices published in Herts Advertiser mention her good works, including at St Michael’s, but do not specifically mention the almshouses.