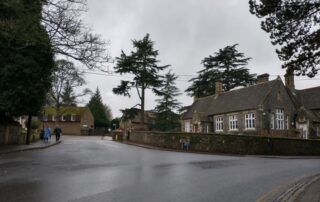 St Michel's school. The building on the left is Church House. St Michael's church is in the background. Aug 2020
Colin Wilson 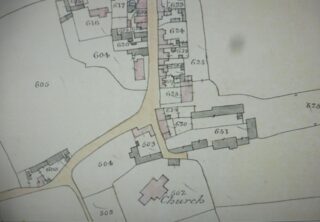 It seems that there was an almshouse, or poor house, on the site of the present St Michael’s JMI school until 1765. It was known as Church House. Truwert notes that Churchwardens accounts record a payment to William Clark for work done at the poor house in 1702, with other references till 1764. We cannot be too forensic about the exact meaning of almshouse and poor house, but almshouse tends to be the most specific and consistent. In the case of St Michael’s, there seem to be 3 institutions with a name like church house. One widow from St Michael’s was entitled to reside at the Pemberton almshouse.

Established in 1764 opposite the east end of the church, by 1767 it had 41 inmates. The size suggests a new building supporting rather more people than would have been in the almshouses. Inmates were aged up to 81 years, many being elderly and infirm. Some of them had been in receipt of monthly pensions. The almspeople were either transferred there along with other poor people (as happened in other places such as Hertingfordbury), to another location, and probably almshouse provision as such ceased. It was used as such for about 70 years until the St Albans Union workhouse was erected in 1836/7 in the present Normandy Road.

The almshouse building was repurposed (or rebuilt) as Downing’s forge, which in turn was demolished by the 1850s when the school was built.

This map is dated about 80 years after the almshouses ceased.
Plot 503 (the site of the present JMI school) belonged to the Earl of Verulam, inhabited by Thomas Downing and others. It does not include information about their status. Downing had his forge there, at the end of Almshouse Close.
Plot 502 includes the site of the workhouse and the present Church House. The 1843 tithe map and the OS maps show a building to the east of the church, just within the churchyard boundary. Hon. Rev. Lord Frederic Beauclerc (Vicarial Glebe) is recorded as the owner and occupier. The map dates from soon after the workhouse inmates were transferred to the Union Workhouse.

The Operation of the Old Poor Law in the Parish of St Michael’s, St Albans, 1721-1834, by Eleanor Truwert
Pages 102, 120
Article in ‘Down and Out in Hertfordshire, a symposium on the old and new poor law’, by Gutchen et al.
Hertfordshire Publications 1984

The Parish of St Michael’s; How well did it care for the poor in the 18th century and early 19th century? by E Truwert
1982 B Ed dissertation; copy held at HALS
This thesis is mostly about poor laws and workhouse

http://www.history-pieces.co.uk/herts.html has information about workhouse children. Notes workhouse may be on site of Church House. Articles by Jill Waterson