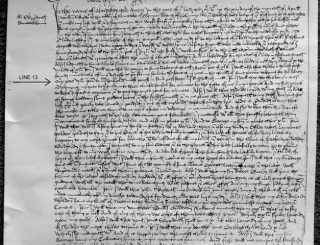 Part of Skipwith's will. The arrow points to line 13, which refers to the almshouse.
Courtesy of Hertfordshire Archives and Local Studies ref 2/139 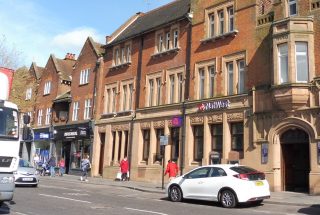 William Skipwith died in 1509.  In his will he states, ‘I will that the three tenements adjoining my gate be signed unto three almshouses for evermore by the gift of me and and my heirs  to keep sufficient reparations and to pay the quit rent for evermore’.

William’s house was at the south end of St Peter’s Street. The approximate site of the almshouses is about where the National Westminster Bank or Moss Bros shop now stands, opposite the moot hall (by 2019 the town museum) and across the road from the White Horse (in 2019 this was the site of Marks and Spencer’s shop).

Clutterbuck has an indirect reference to these almshouses, citing the inscription on Masterman’s almshouse which was built ‘in lieu of three old ones which stood in the street opposite the White Horse’. Neither Skipwith’s nor Masterman’s almshouses are mentioned in Victoria County History. This may be because the support was from the Vestry and not from any endowment. Unfortunately Cussans did not finish the part of his history dealing with St Albans.

It seems that the dwellings were later adopted by the vestry. Indeed, the Vestry minutes referring to Masterman acquiring he land refers to them as the Church houses. There are records concerning rebuilding in around 1652 at a cost of just over £20. These records include rebuilding brick chimneys. A reference in Smith and North’s book talks about 3 almshouses ‘to be newe built with chimneys’ in 1651. They suggest the reference is to Clarke’s almshouse, but that was for 6 people so possibly it is a reference to an upgrade for Skipwith’s which were by then 140 years old. The details of the materials used indicate the size of the dwellings – about 11 ft by 10ft. This is fully discussed in McSweeney’s article. He also records information held by the National Westminster Bank supporting the location of the almshouses.

The almshouses were demolished in 1781. John Masterman, a London goldsmith, acquired the land. There were restrictions in that he was required to pay for the demolition but not allowed to use any of the materials. He built replacement almshouses next to the Marlborough almshouses in Hatfield Road, to provide for six persons as opposed to the three provided by Skipwith.

One factor in the story of these almshouses is that they lasted for about 270 years but precious little is known about them.

In an historical context, William, born in 1443, died in 1509, the same year as Henry VII. Hence he lived through the Wars of the Roses for 30 years of his early life.

A copy of William Skipwith’s will is held at HALS. Ref 2A139