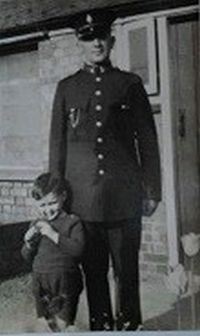 My father, Jack Wilding, was a War Reserve Police Constable based at Tess Road Police Station.   (Tess Road has long since been renamed Woodstock Road South).   The station occupied the area between Fleetville Post Office and what is now the car park of Fleetville Infants School.  Sergeant Clarke and his family lived in the house attached to the station.

Though a small police station Tess Road covered a wide area which included Colney Heath, Smallford, Oaklands, Sandridge, and Woodcock Hill.    Woodcock Hill was a radio station of major importance in WW2.  My father was often assigned to the night shift guarding the radio station.  For this duty the guards were armed with heavy Colt revolvers which could well have qualified as antiques.  The means of transport for the PC’s were sturdy upright handlebar bicycles.

The nights were of course pitch black. Air Raid Wardens more fearsome even than Mr Hodges of “Dads Army” made certain that the “blackout” was strictly observed.  A very small number of vehicles ,mainly military and emergency services, were on the roads.

Although a small outpost of the County Police system the Tess Road station was involved in two incidents that made national news.

The first of these in May 1941 involved a German spy parachuted into the country near  London Colney. Captured by the Home Guard he was initially taken to Tess Road Police Station then transferred to the Tower of London where he was later executed for spying.

The second incident was in 1943 when two Mosquito  aeroplanes, one of which was  piloted by John De Havilland , crashed in Butterwick Woods.  My father was one of the police personnel from Tess Road who were sent to secure the site for the accident investigators.