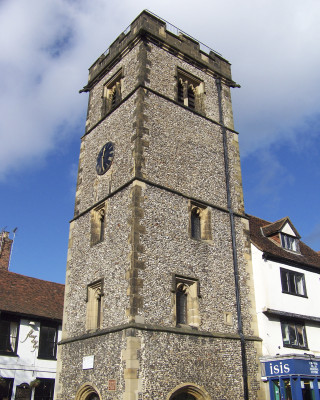 The Clock Tower, built between 1403 and 1412, and the only medieval example in the country.
by Richard Brockbank

The Clock Tower of St. Albans is unique, the only town belfry dating to the middle ages in England. It was built sometime between 1403 and 1412 as a symbol of resistance against the power of the abbot of St. Albans.

There are five floors, connected by a 93-step spiral staircase. The ground floor was until approximately 1900 a shop with lodgings on the floor above. The second floor was the clock keeper’s living room from 1412 to 1866. On the third floor is a Victorian clock added when the tower was restored in 1866. Lord Grimthorpe, a leading authority on clocks who also designed Big Ben, designed this clock, in use today. On the fourth floor is the original bell, weighing one tonne. The fifth floor is the roof, with views of the Abbey, the town and the countryside. It was the site of the shutter telegraph, used during the Napoleonic wars as one of 16 stations linking Whitehall and the North Sea Feet in Great Yarmouth. The Clock Tower was built beside the site of the Eleanor Cross, erected by Edward I in memory of his wife.

The ownership of the tower was at first a kind of committee (the feoffees), and was later within the remit of the Mayor and Corporation. The Clock Tower underwent a major restoration in 1865-66. During the restoration one or two embellishments were added, such as the heptagonal spire at the top. The tower’s original use was to enforce curfews, and in addition to this it was used down the years to keep the time, as a prison and to broadcast the Napoleonic wartime semaphore signals described above.

The bell was, in the early days of the clock, rung by residents of the Clock Tower. In 1485 the clock was leased to a Robert Grane, a smith, who had to maintain it, and to ring it at 4 a.m. and 8 p.m. daily. The inscription on the bell reads ‘Missi de coelis habeo nomen Gabrielis’ (I bear heaven-sent Gabriel’s name)

St Albans Museum has more information on the Clock Tower.