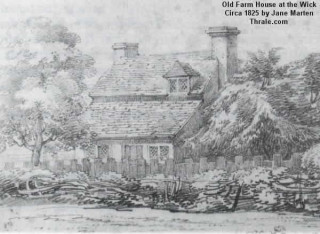 Marshals Wick Farm. The scene of the murder 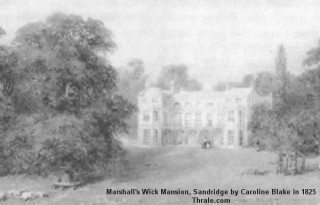 On August 22nd 1880, the summer calm of the woods and the park of Marshal’s Wick was shattered by news of a horrible murder.

The tennant of Marshal’s Wick Farm had been shot in the head in his own bedroom and two women had remained terrified in their own rooms while an intruder ransacked the house.

The news circulated round the town and was reported in the St Albans Times on August 28th. This report is of interest not only because it gave details of the murder but it also described Marshal’s Wick when there was just a large mansion house, several farms and some cottages.

The victim, Edward Anstee, had been a successful butcher in London and came to Marshal’s Wick in 1860. He farmed nearly 300 acres. He was 68, but he looked older, was very keen on cricket and attended matches on Bernards Heath. He also suffered from rheumatism and attended the public baths in Chequer Street, near where the present day Maltings shopping centre is, to obtain relief.

For the previous fortnight the weather had been fine and the farm labourers at Mr Anstee’s farm were busy gathering in the harvest. Mrs Anstee was away visiting relations and Mrs Lindsay, an old widow of a painter and glazier from Veulam Street (Verulam Road), did the housework.

Just before 10 pm on Saturday Mr Anstee withdrew to his bedroom at the back of the house which overlooked the yard, barn, cowsheds and the rickyard. Mrs Lindsay went to her room at the front of the house and the young servant girl, Elizabeth Coleman, went to the attic. Normally a young lad who tended to the cows would stay sat the farm but on that night he went home to Christopher Yard in St Albans.

The newspaper report described the house, which used to be close by to where the Quadrant shopping parade is today. The farm was owned by Mr T P Marten J P, whose park was Marshalswick. The Marten family name is remembered by a road name, Marten Gate, in the area. The park was enclosed by Sandpit Lane, Marshalswick Lane and the railway. The farm house was hidden by trees, some of whch are still standing in the Quadrant shopping centre car park. It was approached by a long path and the house was built of red brick with a portico and bow drawing room window. The house consisted of drawing room, dining room, kitchen, four bedrooms and an attic.

In 1876 lodges had been built at eirther end of the drive which is now, more or less, the route of Marshal’s Drive. The house was to the southwest about halfway along. Some of the trees and bushes around the drive are from the park. Both the lodges show the Marten crest of an “M” and a bird with a ring in its beak.

A gardener lived in the lodge to the east, quite close to the farm, but he did not wake when a gun was fired at 2 am. When the cowman arrived early in the morning the women, who had kept to their rooms, told him of the shooting. Mr Anstee’s body, with a fearful wound in the head, was found in his bedroom.

A lad was sent to the City Police Station at the back of the Town Hall. But, as the farm came under the County Police’s control, Police Constable Quint of the County Police, who lived in Lower Dagnall Street, was called for. Quint and Mr Webster, a surgeon, left for the farm at 5.15 am. The telegraph wire was quickly brought into use and more police arrived from Hatfield, Harpenden, Redbourn and other areas.

A notice was soon issued describing the man as 5 foot 1 inch high, aged about 47 years of age, complexion reddish, hair light brown turning grey, and a moustache with a hair lip and impediment in his speech. He wore a black billycock hat, short brown jacket and brown trousers. Several suspicious characters were questioned.

Superintendent Pike, of the City Police, drove to Gustard Wood near Wheathampstead and, from information receieved, visited the house of Henry Wheeler, farm labourer. Pike found some of the goods stolen a few months before from Jacob Reynolds of Heath Farm on Bernards Heath. He also found a hammer which had been stolen from a Mr Page of St Peter’s Street.

Both Henry and his son George were arrested and brought to St Albans. Henry’s younger brother Thomas walked into The Pineapple on the Sunday evening and, it is said that after a few drinks, began to boast about the murder. The police were called and Thomas Wheeler was arrested.

Some of Mr Anstee’s silverware was found in a wheat field at Evan’s Farm in Sandridge. A pair of trousers belonging to the deceased was found over a hedge. Sergeant Brewer found a joint of uncooked breast of mutton. This was identified as having been brought by the servant at the farmhouse from Mr Fisher’s stall at St Albans market on Saturday.

Another important discovery was made 150 yards from Marshal’s Wick Farm by Police Constable Sparks of Park Street who found a double barrelled shot gun with one barrel recently fired. It was identified by Edward Woollatt, of Samwell’s Farm as being stolen during a fire at his father’s house on the Wednesday before.

Thomas Wheeler was tried and found guilty at the Essex Assizes in Chelmsford. After special preparations Wheeler was hanged on Monday November 29th at the St Albans City Prison in Grimston Road.

Sadly for the Wheeler family the story does not end there. Thomas Wheeler’s daughter, Mary Eleanor, who was only fourteen at the time of her father’s execution, tried to hang herself from a tree in the garden such was her grief. Ten years later, on December 23rd 1890 she herself was executed at Newgate prison for the muder of a love rival namely Phoebe Hogg.