The Popladys of St Albans 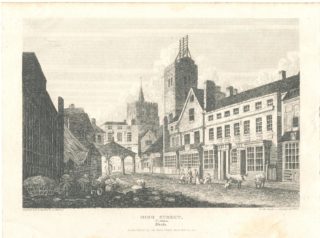 It’s now the custom everywhere to eat hot cross buns on Good Friday, but there’s good evidence to suggest the custom may have originated in St Albans. More definitely linked to the city, however, is the tradition of eating “popladys”, originally on Lady Day, 25th March, but later on 1st January.

On Good Friday 1361, according to the tale, the Benedictine monk Thomas Rocliff of St Albans Abbey created sweet, spiced cakes to be given to the poor along with the more conventional soup. This became a tradition, which was taken over by the city’s bakers after the Dissolution of the Monasteries, even though Father Rocliff’s recipe had been a closely guarded secret.

This didn’t stop bakers from claiming to have discovered the old recipe, and during Holy Week in 1851 a St Albans shop was advertising “cross buns” that were “Hot from the Oven every hour from four o’clock on Thursday until seven on Friday evening. Remember Father Rocliff’s Buns, eight for sixpence.”

Although there are other theories, it may well have been this specific tradition that spread to become a general custom for Good Friday.

Separate, but perhaps ultimately linked, was the tradition of selling “popladys” around St Albans on New Year’s Day, though originally they were associated with Lady Day. The feast of the Annunciation (probably inherited from an older festival to a pagan goddess), this was an important day in the mediaeval era. The beginning of the New Year under the Julian Calendar, it was one of the four Quarter Days on which rents and debts were traditionally paid, making it a key day in both religious and secular life.

According to the legend, a noble lady and her attendants were caught by night on the way to St Albans. The road was difficult and dangerous, but the sight of a light shining from the then-new Clock Tower in the centre of the city enabled the party to find their way safely. In gratitude, the lady left money to fund giving food to the poor on Lady Day, including small cakes in the shape of a woman.

There’s actually no surviving evidence for “popladys” (always spelt that way, apparently) being distributed during the mediaeval period. However, in 1819 a traveller reported in a letter:

I happened to sleep at St Albans on the night of the 31st December last and was awakened early the next morning by a confused noise of boys and girls in the street, crying for sale ‘Popladys!! Popladys!!’ Inquiring at breakfast time the meaning of these words, I was informed that it was an ancient practice in the town to cry and sell in the streets and in the bakers’ shops, on New Years Day a species of cake or bun called ‘Poplady’, one of which was brought in to me.

This cake he described as “long and narrow, rudely resembling the human figure with two dried raisins or currants to represent eyes and another for the mouth, the lower part being formed rather like the outer case of an Egyptian mummy”.

Reasons for the Change of Date

So how did this tradition change from being alms for the poor on Lady Day to a commercial venture on New Year’s Day? It seems unlikely that the legend was purely an invention to explain the later tradition. It fits the date for the building of the Clock Tower, and anyway, an invention would surely place the foundation of the tradition on the current day. So why was it changed at all?

The simplest explanation is that it may have been moved when the date of New Year was changed in 1752, but there may have been other undercurrents. As a feast dedicated to the Virgin Mary, Lady Day lost much of its popularity after the Reformation, although its secular importance remained. St Albans, which had a long tradition of friction between town and abbey, enthusiastically adopted Protestantism as early as the proto-protestant Lollards of the late 14th and early 15th centuries, and the change may have simply reflected this attitude.

However, 1st January, as well as being New Year’s Day under the Gregorian Calendar, was also celebrated during mediaeval times as “Pope Lady Day”, the feast of the probably mythical Pope Joan — hence “poplady”, presumably. Supposedly a woman who, disguised as a man, rose to the papacy, she was a popular figure who was later frowned on by the Church. Perhaps this was a “safer” time to celebrate these edible Lady icons.

Whatever the truth, it’s remarkable that St Albans seems to have been the centre of two religious baking traditions, one now largely forgotten, the other to be found in every supermarket in the country.