The town that time forgot 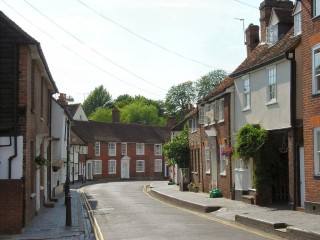 Fishpool Street. Note the raised pavement on the north side
Derek Roft 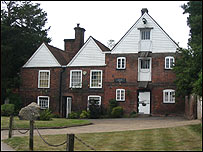 We have heard of the Roman city of Verulamium. And also of the medieval town up the hill near the Abbey. But what do we know about the Dark Ages town which stood between the two?.

Kingsbury, the Saxon town near St Albans, almost certainly existed by 793 AD. It was probably built by King Offa. He excluded it from his endowment to the Abbey, causing a long lasting legal wrangle.

The town covered about 27 acres. The boundaries were roughly where today’s Fishpool Street, Branch Road and Verulam Road are, with a steep rampart on the south east overlooking the old clay pits behind Hill Street. At the southern corner stood the castle where Ver Road is now. Built on a natural hill, the top was levelled and the soil was thrown outwards to form a rampart. A timber fortification ran across the top.

Independent of the Abbey

It was a royal town as the name suggests, governed by the King’s officers and it was independent of the Abbey. The inhabitants mainly relied on the great fishpool for their livelihood. This was formed by a dam across the River Ver near the old silk mills. A map from 1636 shows a meadow to the west of the Ver labelled “A meadow sometymes the Kings Fishe Poole”.

There was constant friction between Kingsbury and the Abbey. In 948 Abbot Wulsin (Ulsinus) founded the St Albans market in an attempt to draw trade away from Kingsbury and to establish a settlement within the confines of the Abbey. Wulsin’s successor, Alfric, bought the great fishpool from King Edgar and drained it by cutting through the dam.

This act effectively deprived the inhabitants of Kingsbury of their livelihood. Alfric destroyed as much of the town as he could but the King’s officers retained a tower as officers headquarters. By the middle of the 12th century this had become derelict and King Stephen allowed it to be pulled down.

So the once thriving town of Kingsbury was finally razed to the ground after standing for nearly 400 years.

Very few signs of Kingsbury are visible today. The ramparts have gradually been lowered as the area has been built over. The long stretch of raised pavement, up to a metre high in parts, on the north side of Fishpool Street is built on the remains on the rampart on that side.

The steeply sloping back gardens of the houses are further evidence of it. The ground behind Branch Road and Verulam Road also slopes up steeply. It is thought that remnants of the timber palisade were found when these roads were cut through. There are further raised pavements in Hill Street which rises rapidly from Verulam Road.

During an excavation in Hill Street in 1976, post holes, pits and a hearth were found. In 1983, again in Hill Street, signs of a defensive ditch were also discovered.

The names of Fishpool Street, Kingsbury Avenue, King’s Road, Ver Road, and Offa Road all bear witness to the existence of Kingsbury. The Kingsbury Water Mill is from a later date and the site would have been under water at the time of the fishponds.

There are also many house names in the area which remember those times such as Kingsbury Knoll, Kingsbury Lodge and Little Kingsbury. Sadly no trace of the castle remains but the hill is now the only evidence that a castle once stood there.