You are here: Home>Herts history>Places>Roads>This road once led to Rome

This road once led to Rome

The route of the Roman Watling Street 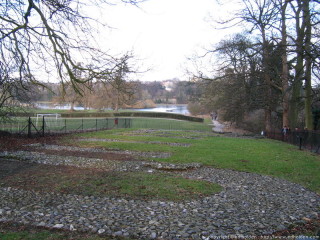 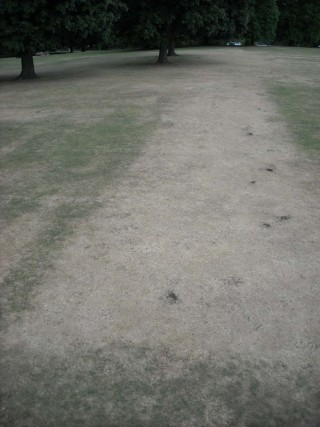 Drought during the summer of 2010 revealed the imprint of Watling Street in Verulanium Park
Verulanium Museum, St Albans

Watling Street has always been a considerable influence on the growth of St Albans. This Roman military thoroughfare was not known by its present name until the 9th century. The name of the road then was “Waeclingas Strate”. The Waeclingas were the Saxon settlers who lived near Verulamium.

The Romans began building new roads after the invasion and sometimes they adapted existing tracks. When it was sensible to build a straight road they built it, but if a river should get in the way they chose the shortest route round it.

It is said that the method of building a straight road was mounting three poles on three different hill tops and lining then up. When the road had been built to the second pole then the first pole went to a fourth hill to be lined up and so on.

Joining the Channel ports to London

Watling Street joined the Channel ports with London and then ran north into Hertfordshire via the hill at Elstree village. It runs on its present line towards Radlett where it passes some Roman pottery kilns.

Coming northwards from Radlett the A5183 (as Watling Street is known by) veers to the east and alongside the route of Watling Street until a mile north of the River Colne crossing at Colney Street.

A bend in the road

At Colney Street both roads run on the same line, bending slightly right at Frogmore by the church. The reason for this bend in the road is that the River Ver is in the way. The road bends to the right again at the northern end of Park Street near to the railway station. The road also rises at this point and then descends to the Park Street roundabout. To the south of the roundabout was a Belgic farmstead. When Boudica burnt the farm in 60AD it served as a warning to the inhabitants of Verulamium that her hordes were coming. The farm was later replaced by a Roman villa.

At the roundabout the modern road runs to the east for a short distance, returns to the old road and then, after the brow of St Julian’s Hill, runs gently through to the south west side of St Stephen’s Church.

One could imagine Roman road builders with their poles standing on top of St Julians Hill, the hill at the northern end of Park Street, perhaps the hill at Harpers Lane and anything which looked like a hill in between. They would have been doing their work lining up the course that Watling Street would take.

Deviations from the modern road

At this point the Roman Watling Street deviates greatly from the present day road. The Roman road followed a line which would cut through the present day King Harry public house and then through the grounds of St Columba’s College in King Harry Lane. The track followed a line across the back of the Westminister Lodge athletic track to a point on the north eastern edge of the Roman Wall that can be seen today. A large number of burials were excavated alongside this track. This point was known as London Gate. This South Eastern entrance was built in the middle of the 2nd century.

Watling Street continued inside Verulamium in a straight line from London Gate for about 500 yards. There was a colonaded courtyard of the triangular which extended for 35 yards on the left. There is a picture in the Verulamium museum of how the temple would have appeared. Sixty yards further on was a triumphal arch across the road.

The street, just before it reached where is now the Verulamium Museum, was diverted to allow the building of he bassillica and forum, and also where it crossed another important road.  The forum, most of which lies under St Michael’s vicarage and grounds, was a courtyard 300 X 200 yards bounded on the Watling Street side.

Adjoining the forum was a temple and to the north east, under the church and courtyard, was the basillica, which housed the law courts and local administration. Pieces of an inscription 12 feet wide were found under the school and can be seen in the museum. Imagine the number of people who would have looked at this sign during the Roman occupation.

The presence of those buildings indicated how Verulamium was as an important local centre. Most of the ordinary houses were built of wood and only the public buildings were built from stone or flint.

Watling Streert continues under what is now the edge of St Michael’s churchyard and a short way along the drive to the manor house of Gorhambury. Along the street just a few paces from the bassillica were a group of shops. Fronted by a roofed 10 foot pavement, they were at first built of wood with the living quarters behind the shops. After Boudica burnt them down they were rebuilt and the foundations of the blacksmith, bronzesmith, pottery shop, refreshment house and possibly a cobbler can still be seen.

A theatre and market hall

Watling Street leaves Verulamium by the North West Gate (later known as Chester Gate). Again the road passes a Roman cemetery. A few yards short of where Gorhambury Drive turns west towards Maynes Farm on the way to the manor house. Watling Street carries on to rejoin the A5183 Redbourn Road just after Shafford Bridge to continue north westward.