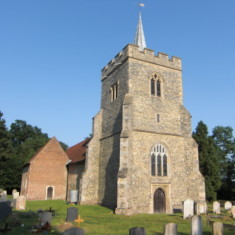 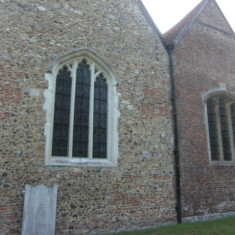 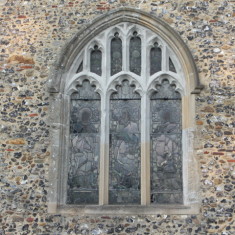 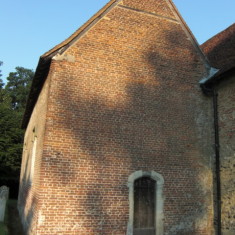 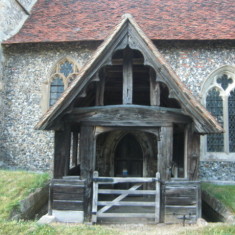 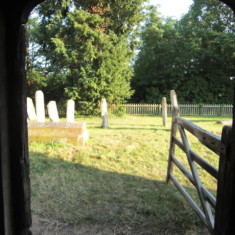 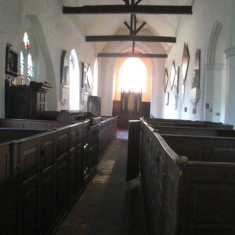 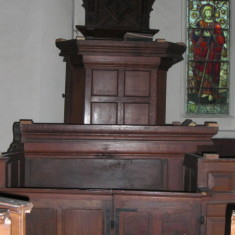 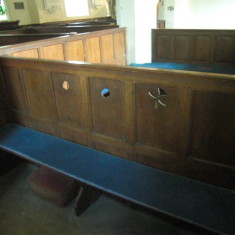 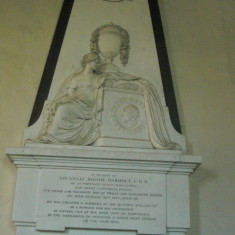 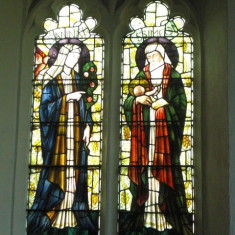 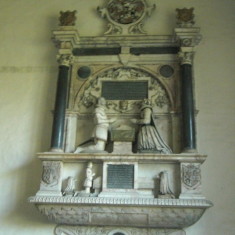 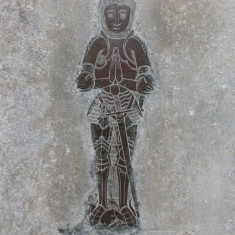 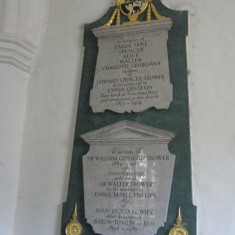 This church is situated on a hill a mile to the South East of the village of Stanstead Abbotts.  Its siting may well be due to the nearness of Terbetts Hill, (nearly all now consumed into the earthworks of the by-pass), which had a commanding position overlooking the junction of the Lea and Stort valleys.  Thus the early settlement had a good defensive position.

It is thought that there was a Roman encampment in the surrounding fields and that the site had a Saxon church on it before the construction of the current church began in the 12th century.

The rise in importance of transport on the River Lea, the bridge over the river and more settled times probably all contributed to the village moving down into the valley.  The church on the hill remained the parish church until 1882.  A church nearer the centre of the village was built and consecrated in 1881 and became the parish church in 1882.

The Exterior of the Church

The entrance porch is 15th century whilst the south doorway inside it is 13th century.

The tower is 15th century.  It was the work of William Stowell, the master mason of Westminster Abbey and architect of St. Margaret’s Church, Westminster.

The north wall of the nave which was built in the 12th century, has rough flint rubble mixed with Roman and rendered.

The 16th century chapel abuts the north side fo the chancel.  It was constructed by Edward Baeshe the General Surveyor for the Victuals of the Navy.

The east wall of the main church contains a late 15 century perpedicular window which probably replaced a larger 13th century one.

The south side of the nave and chancel is flint faced with clutch stone dressings and windows.  The western end is 12th century and was the nave of the original church.  The eastern end is 13th century.

The organ has a Churchwarden Gothic case and was built in 1864 by Bevington.  The organ is a manual instrument with six stops and is hand pumped.  It used to stand in the nroth chapel but was recently moved and restored by Brian Bunting of Epping.

There are three hatchments for members of the Booth family inside hanging on the walls as well as many memorials to the Booths and other families.

From 1882 until 1975 the church became a chapel of ease.  In 1975 it was declared pastorally redundant and passed into diocesan hands.  In 1977 it was taken over by the Redundant Churches Fund which is now called Churches Conservation Trust.  This trust looks after buildings which are surplus to immediate parish and diocesan use.

Although the church is not used for regular services a limited number are still held here.  A Rogation Sunday service is often held in the spring; a harvest festival in the early autumn; a Patronial Festival is held in July and aa Advent service is usually held by candlelight in the late afternoon.  Occasional christenings, weddings and funerals are also held in the church.  it is also used for concerts and fund raising activities.

The text above is based on the booklet, “Church of St. James” Stanstead Abbotts, Hertfordshire by Jonathan Trower which can be purchased at the church for a donation to the church fund.

To view a larger image click on the photograph required.