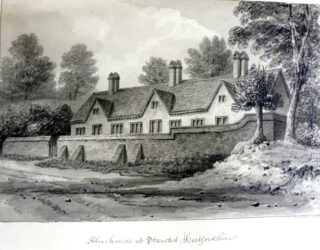 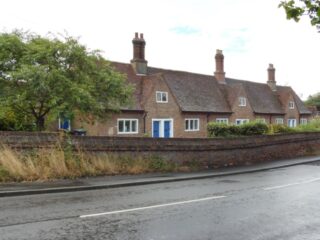 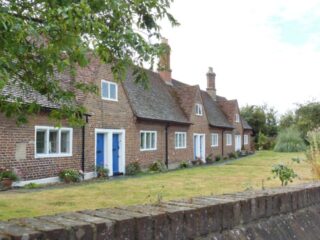 Baesh almshouses, showing the well-kept front space. The brown patch on the wall is paint, not a datestone. Aug 2016
Colin Wilson 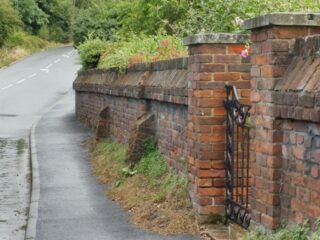 Part of the front wall of the Baesh almshouses. Aug 2016
Colin Wilson 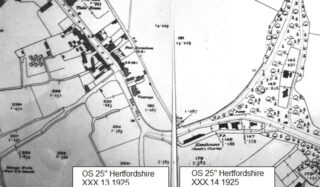 Five generations of the Baesh family owned Stanstead Bury from 1558 till 1678. They were Edward, Ralph, Edward, Ralph and Edward. Other spellings are Bash, Baish and Baeshe. Such variations are not unusual in that period.

The first Edward (died 1587) seems to be the first time the name appears in English records. The son of a Worcester tradesman, he was in charge of provisions for the Royal Navy under Henry VIII through to Elizabeth I. His son Ralph built St James’ Church, Stanstead Abbotts, where the family tombs can be found. Note that the Baesh memorial in St James church is for the first Edward, with his wife and children. See Geoff Cordingley’s article about the church, which includes a photo of the memorial. The one who founded the almshouses was Edward, the third in the line, who also founded other charites. He was an MP, representing constituencies in Lincolnshire. Sir Edward Baesh died on May 12th 1653 and was buried in the vault under the chapel annexed to the north side of the chancel. As he was childless, the ownership of the estate transferred to his cousin, Ralph.

Some sources cite the almshouse building date as 1653, the date his will was proved, incorrectly saying the almshouses were built as a result of his will. However, earlier sources differ. Chauncy (writing in 1700), Salmon and Clutterbuck cite the date of the deed as being 11th year of Charles I. Some sources cite 1636, which is viable as the date of construction. In his will written in 1652 Edward states, ‘Whereas I have already by my deed settled twelve pence apiece ….. on six almswomen [in a house] built for that purpose my will is that my manor of Stanstead shall be charged [for] five and twenty pounds [….] for ever for the payment of twelve pence apiece more weekly to the said six almswomen ……’ This implies that the almshouses were in existence at the time he wrote his will. The will contains no statement about building them, and the almshouse reference is to increase payments to the almswomen. The History of Parliament website supports this as there is a mention of the almshouse in what seems to be a chronological account. Wittering has a date of 1616 but this seems unlikely. Unfortunately there is no dedication stone on the building. Maybe confusion arose as Cussans used the word ‘bequeathed’ when referring to the deed.

The almshouses themselves are one of only five in Hertfordshire to be listed with a II* rating, indicating their historical importance. The Historic England reference is 1078739, dating from 1951. They are single storey, but VCH cites them as two storeys. Looking from the outside, it may appear that the space under the gables over the doors is an upper storey. However a chance meeting with one of the residents in 2022 revealed that the building was single storey. The space over the doors was loft storage space. The accommodation nowadays is for three. Some additions have been made to the buildings, presumably for extra facilities such as bathrooms. The forecourt wall is included in the listing.

The endowment consisted of various plots of land and a rent charge. No public subscriptions are sought. Financially the Charity seems to be on a sound footing, with income exceeding expenditure for the last few years.

The original accommodation was for six widows. According to Wittering they were widows of decayed tradesmen. Cussans describes them as ‘poor women of civil and religious conversation belonging to the parish’.

There are very few newspaper references.  An 1878 report about the Stanstead sewage works recorded that sewage overflowed into the upper ditch, then into a horse-pond on the farm, and ran into the watercourse in front of the almshouses (causing serious fouling) on its way to the River Lea.

Elizabeth Lambert, an almswoman, had £5 (about £400 in today’s money), a box, a purse and 4 pairs of spectacles stolen in 1893. She had left the door unlocked for only 10 minutes, but that was enough time for Albert Smith, a fish hawker, to steal. Unfortunately for him he was seen by a Mrs Bunting who occasionally visited the almshouses to attend to one of the old ladies.

The Charity is registered with the Charity Commission, ref 203200. The aims are for the benefit of the residents in the almshouses of the charity or any of them in such manner as the trustees think fit from time to time. The most recent scheme is dated 16th March 1998. They are also affiliated to the Almshouse Association.

The History & Antiquities of the County of Hertford, by Robert Clutterbuck
vol 3 Braughing Hundred p250
London 1827
Printed by and for John Bowyer Nichols, 25 Parliament Street, London

The History of Hertfordshire, by N Salmon
p251
London 1728

History of Parliament http://www.historyofparliamentonline.org/volume/1604-1629/member/baeshe-edward-1594-1653 Published in The History of Parliament: the House of Commons 1604-1629, ed. Andrew Thrush and John P. Ferris, 2010. Available from Cambridge University Press

Newspapers. Can be accessed on the British Newspaper Archive website.