One of the volunteers at Hertfordshire Archives & Local Studies (HALS) came across these letters while sorting through a box of deeds which came from Shephall in Stevenage. The letters provide a brief but fascinating insight into the attitudes and lifestyles of people working in India in the late 18th century, and give an indication of some of the dangers, such as fever, that they faced.

The two letters here were written by Mr R. Spencer to Mr Oliver Edwards and they refer to the deaths of George and Harry Nodes, who had been living and working in India in the 1700s and who are believed to have been related to Mrs Edwards. Mr Spencer had been appointed by George Nodes as his attorney.

The letters also inform the Edwards family that both George and Harry had had children by their respective mistresses, a situation that was not uncommon at the time. Sadly, only one of the three children, Harry’s 5-year-old son, had survived.

The first letter is mostly concerned with matters to be dealt with in settling George’s estate: 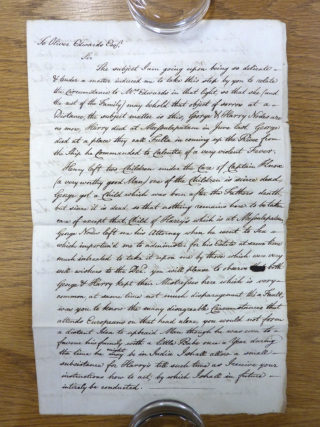 The first page of the letter to Oliver Edwards, dated 18 November 1776

The subject I am going upon being so delicate & tender a matter induced me to take this step by you to relate the circumstances to Mrs. Edwards in that light, so that she (and the rest of the Family) may behold that object of sorrow at a Distance; the subject matter is this, George & Harry Nodes are no more, Harry died at Meessulapatam [Masulipatam] in June last, George died at a place they call Fulta in coming up the River from the Ship he commanded to Calcutta, of a very violent Fever.

Harry left two Children under the Care of Captain Knox (a very worthy good man) one of the Children is since dead; George got a Child which was born after the Father’s death, but since it is dead, so that nothing remains here to be taken care of except that Child of Harry’s which is at Meessulapatam [Masulipatam].

George Nodes left me his Attorney when he went to Sea which importun’d me to administer for his Estate at same time much intreated to take it upon me by those which were very well-wishers to the Dec’d [deceased] you will please to observe both George & Harry kept their Mistresses here which is very common, at same time not much disparagement tho’ [though] a Fault, was you to know the many disagreeable Circumstances that attends Europeans on that head alone, you would not form a distant Idea to upbraid Man though he was even to favour his family with a little Babe once a Year during the time he might/may be in India. I shall allow a small subsistence for Harry’s till such time as I receive your instructions how to act, by which I shall in future intirely be conducted. 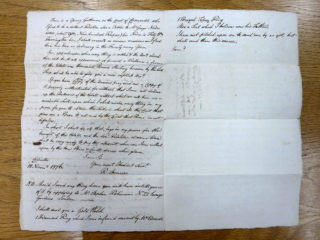 The second and third pages of the letter to Oliver Edwards, dated 18 November 1776

There is a Young Gentleman on the Coast of Coromandel who I find to be a distant Relation also a Debtor to Mr George Nodes Estate (about 900. Nine hundred Rupees) his Name is FitzWm [Fitzwilliam] Barrington him I shall consult on various occasions as I find there has been an intimacy in the Family many Years.

I am apprehensive when every thing is settled & the Acct. [account] closed there will be to all appearances at present, a Balance in favour of the Estate one thousand Pound Sterling however by the last Ship shall be able to give you a more explicit Acct. [account].

If you have Coppy/Will of the deceased pray send me a Coppy of it properly authenticated for without that I cannot deliver up the Balance of the Estate without what we call here an amicable Suit upon which I shall render every thing in my power for you to obtain the Suit; in short its the Court that gives me a Power to act and by the Court that Power must dissolve.

In short I shall do all that lays in my power for the benefit of the Estate, and the dec’d [deceased] Relations at same time shall be very ready to pay the amount, whenever I am called upon by the true Heirs & Courts decree when given.

Your most Obedient Servt. [servant]

NB.  Shou’d I send any thing home you will have intelligence of it by applying to Mr Stephen Robinson’s No. 23 Savage Gardens, London

I shall send you a Gold Watch
1 Diamond Ring which I was inform’d was sent by Mrs. Edwards
1 Brazed Topaz Ring
Also a Seal which I believe was his Father’s

I have not pitched upon one to send’em by as yet, but shall send them this season

The second letter was written about four months after the first and refers more specifically to Harry’s young boy and raises questions about his future: 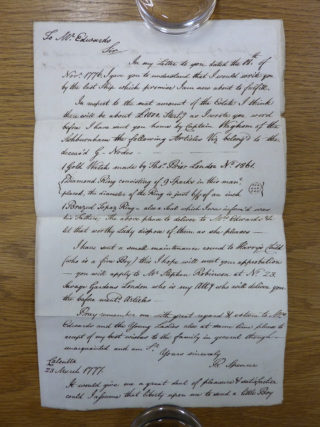 In my Letter to you dated the 18th of Nov. 1776, I gave you to understand that I would write you by the last Ship which promise I am now about to fulfill.

In respect to the neat amount of the Estate I think there will be about £1000 Sterl.g [sterling] as I wrote you word before I have sent you home by Captain Wagham of the Ashburnham the following Articles Viz belong’d to the deceas’d G. Nodes

1 Diamond Ring consisting of 9 Sparks in this man.r [manner] placed [diagram of the ring on page], the diameter of the Ring is just 6/8 of an inch

1 Brazed Topaz Ring – also a Seal which I was inform’d was his Fathers; The above please to deliver to Mrs. Edwards & let that worthy Lady dispose of them as she pleases

I have sent a small maintenance round to Harry’s Child (who is a fine Boy) this I hope will meet your approbation – you will apply to Mr Stephen Robinson at No. 23 Savage Gardens London who is my Att’y [attorney] who will deliver you the before ment’d [mentioned] Articles.

Pray remember me with great regard & esteem to Mrs. Edwards and the Young Ladies also at same time please to accept of my best wishes to the family in general though unacquainted and am Sir

It would give me a great deal of pleasure & satisfaction could I assume that liberty upon me to send a little Boy (about 5 years old) to be under the direction (in respect to his Education) of Mrs. Edwards, let the Expence be what it will.

Unfortunately, there is no record (yet discovered) of Mr Edwards’ reply to Mr Spencer, but one can only hope that Mrs Edwards decided to take the ‘little boy’ into her care.