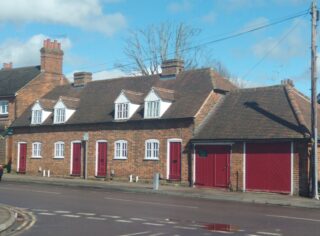 Hellard's almshouse, with the bath house on the right. Apr 2022
Colin Wilson 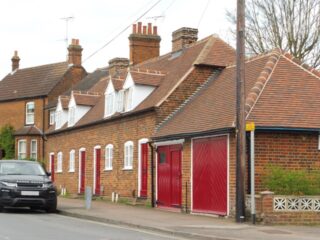 Hellard's almshouse, with the bath house on the right. Jan 2017
Colin Wilson 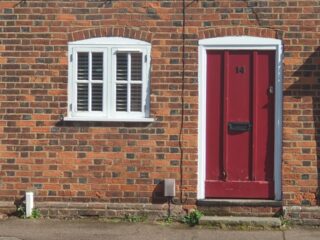 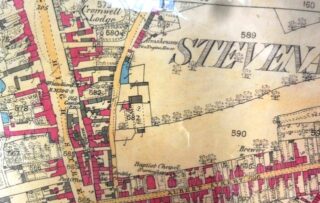 OS 25" map Hertfordshire XII.15 1881. The almshouse is annotated at the centre top of the image
Courtesy of Hertfordshire Archives and Local Studies

Until recently Hellard’s almshouse was the oldest continuously-occupied almshouse in Hertfordshire, fulfilling its purpose for half a millennium. That ended in 2019 when Stevenage Consolidated Charities became linked with Stevenage Haven. The building is now used for short term housing for the homeless rather than long term as would be the case for an almshouse.

Many almshouses are but briefly mentioned in records. So much information is available about Hellard’s almshouse that it’s hard to know where to start. Probably the most fortunate event was in the late 19th century when some church officials were looking through a trunk of documents and found all the records. They were later catalogued and translated. They are now stored at HALS. Census records have also shown useful information.

Foundation
But to the beginning. Stephen Hellard was the rector of Stevenage for 34 years, from 1472 till his death in 1506. Remember that in his days the English church was of the Roman Catholic persuasion. He founded an almshouse for three poor folk in 1501, which he called All Christian Souls House. In his will  he stated they had been ‘lately built’. However, the genesis was at least a quarter of a century earlier with the gifts of land by John Hykman, Thomas Gynne and John Huckle in 1482 and Alice Sawell in 1483. It may go back even further to 1460 when The Falcon was given in trust to the chaplain, William Parker.

Beneficiaries
The provision was for 3 poor folk (male or female) who would live there rent free. Cussans c1870 noted that three houses, occupied by six aged widows, now stood on the site of the original messuage. While there were three (later 4) dwellings, each dwelling was shared, providing for 6 or 8 residents respectively.  Residents had to have lived in Stevenage for the previous 2 years, and not received Poor Relief; they had to be unable to maintain themselves because of age, ill health or infirmity. Paupers (such as those who had received poor relief) were not eligible though the case of Sarah Piggott was considered in 1911. It was proposed to ask the Charity Commission if the poor relief disqualification could be removed.

Personal Relationships
There are a few cases where relatives shared. In 1881 Mary Bigg (then aged 81) had her grand-daughter living with her. She was described as a scholar and was but 11 years old – a very large age difference. In 1936 Miss Ellis applied for residence. She had been living in the almshouse with her mother who had since died. Most of the time non-related people shared. This did cause tensions at times, which the trustees had to deal with. Charlotte Gayler was appointed to live with Mrs Chalkley in October 1916. Mrs Chalkley complained to the trustees about her behaviour, who decided in her favour. Mrs Gayler had left the almshouse by November. Mrs Chalkley died in March 1918 and Mrs Gayler was recommended for consideration. In October 1918 she wanted to share with an inmate with whom she was related, but within 3 months it was reported that it had not been possible for her to go into the almshouse and that she had died. We can only imagine that it can be hard enough living with another person, basically a stranger, especially if both are elderly and infirm and probably set in their ways.

While most of the available information about almshouses is about the buildings, endowments and governance, we must not forget that they were provided for people. And people have their own individual needs, characters and foibles. It’s just that they are not recorded apart from occasional allusions or when things go wrong.

The Great Fire of Stevenage 1807
Once more we must remember that things change. Stevenage at that time was a smallish place of 258 properties, with a population of about 1250 people. It roughly equates to what is now Old Stevenage. Anyway, it seems that a fire broke out about noon at the corner of Walkern Road, at the north end of the town. The wind was from the north, leading to the destruction of 42 houses, about a sixth of the town. Unfortunately the wind shifted to the west, taking the fire towards the almshouses. Whether they were burnt down or demolished as a firebreak varies with the sources. However they were rebuilt soon after. Later on the fire station (which later became a bath house) was built next door.

The Minutes
Most of the minutes have survived. Reading through them shows the reality of the humdrum reports and decisions for the trustees. The same names and payments turn up on a regular basis, minor and major repairs have to be arranged, and limited finances have to be allocated (or requests declined). Of course the minutes do not record how much discussion was required at times. Often a provisional decision was made and one of the trustees charged with checking the information.

Later Developments
A threat which did not materialise occurred in 1948. The Development Corporation wanted to obtain the freeholds of all properties in the development area, but at that stage did not envisage needing the almshouses for about 10 years. It was also in 1948 that the buildings were grade II listed by Historic England, ref 1101199. While the almshouses were never required for the development, some land was sold for the by-pass.

Requirements for housing provision are regularly updated and more facilities are needed. In the case of Hellard’s almshouses they had to plan for ranges suitable for elderly people; sometimes they were obtained second-hand. Lavatories (in 1952), indoor water, central heating and outside lights were all added at different times. The local Council came into the picture requiring various improvements, though they did also provide some grants for this.

1959 saw major improvements. One plan was to rehouse residents for the period, but finally each resident used a vacant dwelling while theirs was renovated. At a later date consideration was given to combining dwellings as they were simply too small. This had certainly been done elsewhere, such as at the Brewers and the Skynners almshouses. In 1969 it was thought the buildings were in a state of decay and that even considerable expense would not bring them up to modern standards. The trustees considered disposing the almshouses to one of the statutory bodies, but the Charity Commission refused to sanction the sale unless it was not practicable to put them into a proper state of repair. Improvements and redecoration were then carried out.

The Situation in 2021
To bring the history up to date, Haven First (formerly Stevenage Haven) is a charity working with homeless people. The almshouses were transferred for their use in December 2019. Their use now is for short term accommodation for the homeless. In a way this reflects at least the spirit of their foundation.

The Hellard almshouses and Other Stevenage Charities 1482 – 2005 ed Margaret Ashby
Historical Record Society 2005 ISBN 0 9547561-2-6.
This is by far the most useful reference book. It contains transcripts of the documents held at HALS, minutes of the charities, relevant census returns and many other sources. With this publication there is no need to consult the original documents.

The History & Antiquities of the County of Hertford, by Robert Clutterbuck
Vol 2 pp 442-3
Printed by and for John Bowyer Nichols, 25 Parliament Street, London 1827

DP/105/25/5 1665 Bargain and sale of 6a, Stonycroft and Long Stockings, Nicholas Clerke to feoffees, to provide income for almshouses

DE/Ha/B2141 1909-1910 Printed scheme of the Charity Commission creating the Stevenage Consolidated Charities, 1909, and providing for a variation of the scheme. Author: Hertfordshire Archives and Local Studies