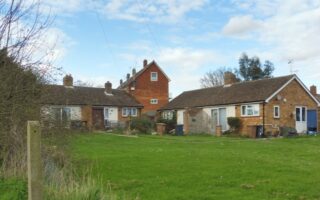 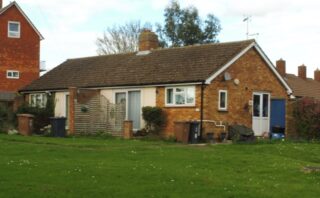 One of the Inns almshouses. Apr 2017
Colin Wilson 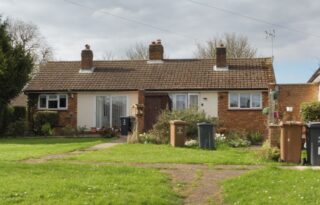 Planning permission issues meant these almshouses weren’t built till a decade after the death of Jeremiah (Jerry) Inns, who died in 1945 at the age of 67, around the end of World War II. He is buried at St Nicholas church, Stevenage.

By 1949 the trustees had chosen a site of an acre and had plans drawn up by an architect. However, planning permission was an issue. Stevenage was developed following World War II, the new town being built to the south of what is now known as the Old Town. However, the site was zoned as part of the Neighbourhood Centre of Old Stevenage Neighbourhood and the powers that be thought the site was inappropriate. The trustees’ response was that they were not interested in any other site. The site had been chosen before the New Town Corporation came into being, and if the almshouses were not built there the legacy and its benefit to the people of Stevenage would be lost.

The discussions continued till at least 1954. The issues were resolved, and the almshouses built. They were integrated into the other local buildings. From the exterior the almshouses and the nearby Council properties are similar in style. They are on their own plot of land, with a decent sized grass area.

The Jeremiah Inns charity is registered with the Charity Commission refs 213088 (Jeremiah Inns Charity) and 5187118 (the Inns Almshouse Trust),  The aims are recorded as the provision and maintenance of four almshouses for the benefit of poor persons and allowances to inmates, and payment to the rector of Stevenage for general charitable (non-ecclesiastical) purposes of the parish. They are also affiliated to the Almshouse Association.