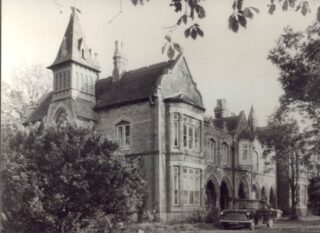 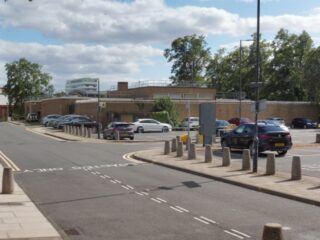 Stevenage Court and Register Block. The site of The Guild. The gardens were past the left of this image. Jul 2020
Colin Wilson 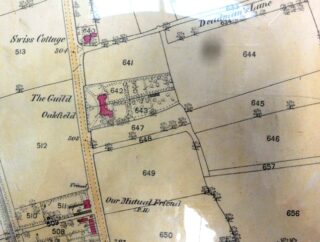 ‘The best laid schemes of mice and men gang oft awry’, to quote Robert Burns, was W Frampton Andrews’ summary of this venture at the end of a talk published in the Herts Advertiser in 1906.

Charles Dickens and Lord Lytton arranged for the building of almshouses for literary or artistic men and women. Lord Lytton gave land to the value of £100, but it was of little value, forcing the building to be erected on the border of almost inaccessible villages (just don’t say that to present residents of Stevenage and Knebworth!). The land was described as being ‘of prairie value’. Lord Lytton wrote a play. The profits from productions in 1851/2 of over £3000 were the basis of The Guild Fund. The building was opened in 1865.

The site is noted as The Guild on the 1881 OS map, but later maps do not label it. It was to the north of the seven tumuli (now known as Six Hills, near the junction of the A602 and the A1M), just south east of what is now the Stevenage Arts & Leisure Centre and to the east of the present station. This was confirmed using the side by side viewer facility on the National Library of Scotland website.

The site itself was a pleasant one with trees and plenty of space. Indeed the gardens stretched back as far as what is now the HSBC bank to the bus station. The OS maps suggest there was a semicircular driveway from the main road.

The building is described in considerable detail in an 1865 Hertfordshire Mercury article. It was in the gothic style, with an arcade, towers at each end, pediments and gables. Construction was brick with tiled roofs. It provided three dwellings under one roof.

Unfortunately the building costs used the money, leaving nothing for an endowment. Furthermore the location was away from London (literary people don’t like being away from the action) and the rail fare to London cost about the same as the rent for London accommodation. It must be remembered that Stevenage New Town had not been built then. The station was further north to serve Stevenage Old Town, sited to the south of what is now Gunnels Wood Way (A1072) and the junction of Julians Road. Any resident who wanted to visit London would have had quite a trek just to get to the station.

Hence, no elderly beneficiaries ever lived there. After about 15 years it was divided into two properties named The Guild and Oakfield, then let out to local tenants. The properties were sold in 1901, the proceeds going to the Royal Literary Fund. The building was demolished in 1962. The Court and Register Office in Danesgate now occupy the site.

To quote modern advice about properties – Location Location Location. And in this case the location was wrong. To quote once more from Frampton Andrews’ talk, ‘the original Bulwer-Dickens scheme was magnificent in idea, but like most things connected with “literature and art”, it was not adapted for the commonplace and everyday world’.

Herts Advertiser Saturday 01 September 1906 p4 col 7. This is the principal source for this article. These two  articles can be viewed on the British Newspaper Archive website at https://www.britishnewspaperarchive.co.uk/

Illustrated London News 5 Aug 1865 p106. This article reports speeches by Lytton and Dickens at the dinner held on the date of the inspection.

Illustrated London News 30 Nov 1850 p417 includes an article about Lytton’s theatrical fundraising efforts. It can be viewed on-line at https://go.gale.com/ps/retrieve.do?tabID=Newspapers&resultListType=RESULT_LIST&searchResultsType=SingleTab&searchType=AdvancedSearchForm&currentPosition=7&docId=GALE%7CHN3100026478&docType=Article&sort=Pub+Date+Forward+Chron&contentSegment=ZILN-MOD1&prodId=ILN&contentSet=GALE%7CHN3100026478&searchId=R5&userGroupName=herlib&inPS=true&ps=1&cp=7

The following documents stored at  HALS could not be viewed at the time of writing:

DE/RY/B428A dated 1901 is from the records of Nash and Rowley, auctioneers of Royston
Two houses once called The Guild and now called Woodlands and Oakfield.