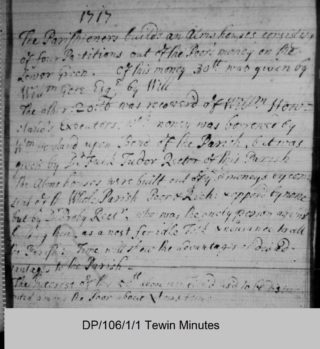 The distinction between the idle poor and the deserving poor is a discussion which is unlikely to be resolved.

The Hertford Sessions Rolls for 9th July 1644 refer to a letter from Fulke Tudor, of Tewin, asking for permission to remove the almshouse which was in need of repair and inconveniently sited in the churchyard. The parishioners wanted to rebuild it in a more convenient place. At the risk of stating the obvious, the almshouse was put up some time before then. Fulke died in 1688.

A proposal to build an almshouse at Tewin in 1717 was agreed by all the parishioners except for the rector, Dr Proby, who thought it would be a nest for idle folk and a nuisance to all the parish. Only time would tell.

The provision was a building in four partitions, and was built on the Lower Green. The exact location has not been ascertained. The OS map for about 1900 shows buildings on all sides of the green, so the almshouse could equally have been on any side. The 1838 tithe map does not help much either (assuming the workhouse lasted till then, following the 1836 Poor Laws), the only likely entries being plot 115a used by the Parish Offices.

Finances. £30 was given in the will of William Gore (written 1707), to be added to the monies provided by Francis Boteler and Doctor Tudor. Cussans also mentions the money from Sir Francis Boteler. About £20 had been borrowed from the parish by William Howland. This money was recovered from his estate, and then given for the almshouse by Rev Fulk Tudor. There is a footnote that the interest on the £50 was distributed among the poor at Christmas, so there may be some doubt as to how the building was actually financed. If the building was paid for, the capital would have gone hence there would be no interest. Otherwise, the contribution from Francis Boteler may be relevant. Note needs to be taken about dates; it would appear these payments were for the original almshouse.

The almshouse was later converted into the workhouse. The 1777 Parliamentary Survey recorded there was provision for 20 people, so how they fitted into 4 partitions raises a further query.

Fulke Tudor death and will  https://www.ancestry.co.uk/discoveryui-content/view/801705:5111