When the bombs stopped: life in Thundridge after the war 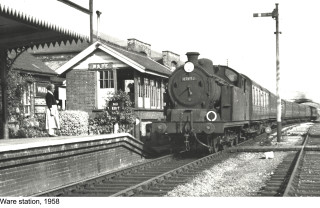 After the bombing stopped Mother was anxious to visit her London relatives. She had lost a brother, “missing on active service”. I had found her weeping quietly in the kitchen clutching a letter with the sad news. It was a scene no doubt replicated thousands of times throughout the country but as children we were unaware of any mass grief. There was no television to focus on emotions. Life in Thundridge went on with cheery, if grim, optimism fuelled by radio comedy such as Itma and the victorious auguries of D-Day. Apart from a brief announcement at school even the death of little Evelyn Clarke from scarlet fever was not an occasion for tragic gestures or counselling. Life went on. Leaving Pop at home, my brother and I, scrubbed and in our Sunday Best, Mother in best hat, coat and gloves, set off for the steam train from Ware to Liverpool Street. If we were lucky there was also a trolleybus or tram ride involved.

There was always a delay at Ware level crossing, waiting for the train to pull into the station before we crossed the rails for the correct platform. Steam engines were soot-encrusted monsters belching smoke and steam, filling the air with smelly coal dust. The carriages were always grimy and a hazard to clean clothes; putting one’s head out of the window risked a sooty face (apart from decapitation). These icons of male nostalgia failed to inspire women trying to look their best for the nation’s capital.

Heaps of rubble and blackened walls

Through the smeary windows London was a sorry sight. The obscenity of war exposed intimate details of lives shattered in seconds by Hitler’s Luftwaffe. Heaps of  rubble created dead-end streets once teaming with life. Blackened walls, jagged against the sky, remained drunkenly upright, unsupported and unsteady. A third floor bedroom imprinted itself on memory, a pink lampshade still hanging above a neatly made bed with matching spread. The wallpaper echoed the theme. An entire wall had vanished like the removable front of a doll’s house, blown out in a bomb blast. It was surreal.

The realities of wartime like the blackout and rationing affected the whole nation but the Blitz was specific to London and one or two other large cities. It was amazing that anyone survived. Life in the country was very different, even with attempts to supplement our diet with snoek (a fish) and whale meat. Ugh!  Mother tried only once to serve these “delicacies” but they were rejected by the whole family out of hand. Our homegrown rabbits and the occasional chicken saved the day.  Much more palatable than weird foreign foods were the annual wild strawberries picked by family groups every summer, collected in jam jars and taken home to mash with sugar for tea. Cream was an unknown luxury and we always had evaporated milk instead. Autumn brought mushrooms foraged from green pastures (where they still existed); horse mushrooms were as large as dinner plates, a meal in themselves.

Bathing by the mill

Despite the absence of toys, fathers and bananas, village children enjoyed the freedom to roam fields and woods. Summers meant long meanders along footpaths, over stiles and across cornfields where the golden ears stood taller than our pink ones. Nowadays corn is only knee high, not entirely due to adult human growth. On hot days the river beckoned. A small crowd of bathers would gather on a gravel ridge   opposite the mill where the water deepened towards the lock gates into a dark, ominous pool shaded by trees. Smaller children stayed safe in the shallows while teenage boys showed off, daring to walk across the lock gates and diving into the deeps. Amazingly nobody ever seemed to come to any harm.

My sister’s post-war wedding reception at Cannons Hotel ended at our house, friendly GI’s filling the livingroom with banter and Glenn Miller. He had been a forbidden favourite, played illicitly by Mary when Pop was out of earshot. In London she had waited in line to see the band perform live, only to hear an announcement that the aircraft bringing them to England was missing.

Entertainment in rural Hertfordshire was few and far between. Occasionally there would be a Gang Show at the village hall organised by the Scouts. These were always very jolly and enjoyed by a full house. My early stage career was extinguished by a puddle left on the floor by the infant chorus line. Luckily it was in another village. Ware Drill Hall was the venue for many post-war performances including Dame Myra Hess, famous pianist. In Ware a dance teacher called Esmeralda (Esmee Styring, I believe) produced her own shows with dance troupes under her direction. These were much enjoyed and to a high standard. Esmeralda herself brought the house down with her portrayal of a poor peasant girl pleading for a flower to place on her mother’s grave. As an awkward pre-teen my clumsy attempts in Esmeralda’s corps de ballet were nipped in the bud to the strains of Grieg’s Peer Gynt (In the Hall of the Mountain King). I can hear it now.

A talk by Sir Edmund Hillary

One of the highlights of Thundridge village hall events was a talk by Sir Edmund Hillary after his successful ascent of Everest with Sherpa Tensing. Questions were invited and my mother asked how it felt to reach the summit. Rather to her disappointment the great man replied that he didn’t think of any poetry but was just glad to get there. Mother, a repressed aesthete herself, occasionally played violin with a small ensemble led by Miss Hay. Miss Hay and Miss Webster shared a large house with walled gardens and heated greenhouses. Sometimes we would receive an illicit ripe peach from the gardener.  Mother also prized her Kodak Brownie box camera and took a rare photo from the top of the church tower; it was used as a postcard from Thundridge for years.