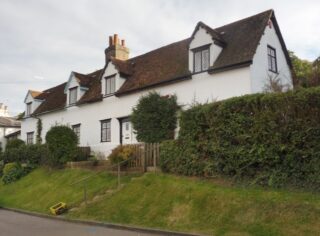 Jane Wall’s memorial in Thundridge church notes she was the largest benefactor in 400 years. Note this is the new church built in 1853; the tower of the old church still exists. In her will of 1573 she left lands and property for the relief, help and maintenance for the poor people of Thundridge and Steyning (in Sussex) where she owned further property. But there does not seem to be any reference to an almshouse. Victoria County History makes no mention of an almshouse.

Even so, an almshouse did exist. It could have been built during her lifetime or built later by her trustees. The overseers’ accounts, which begin in 1638, contain recurring entries for faggotts for the poor widow in the almshouse. The Charity Trustees account book commences in 1658 and ends in 1695. It records regular weekly payments being made to the poor, and the Trustees paid towards the upkeep of the almshouse. Funding was provided by rents from various landholdings.

By 1774, two centuries later, the building had fallen into decay. A replacement was erected in the gothic style. The Historic England entry indicates the present building dates from the early 19th century period and confirms it was an almshouse. This building had 4 apartments.

Half a century later, in 1827, land and the almshouse was sold to the Cheshunt Turnpike Trust for £150. In the absence of other information it could be assumed that the almshouse provision ceased at that time. That would mean the present building may have served as an almshouse for about 50 years.

The provision for the poor continued. One unfortunate result of the sale was that the solicitor absconded to Van Dieman’s Land (now Tasmania) with £105, the net proceeds from the sale. Help came in the form of Mr Hanbury of Poles, an estate to the north west of the parish. While the assets had effectively been lost, he did pay the 3% interest which would have been obtained. A few years later he invested £105, equalling the lost capital.

The building is now 2 residences but retains various period features, according to a 2016 estate agent’s description. It was grade II listed by Historic England ref 1078719 as of Sep 1983.

The Jane Wall Charity is registered with the Charity Commission ref 210481. The governing document is dated Nov 1917. Its aims are the general benefit of the poor, including grants in cash or kind, aid in sickness; loans etc. It was removed in Feb 2017 as it ceased to exist.

A/1779 Copy will of Jane Wall of Wadesmill [formerly the wife of John Gardiner, A/1778]. Property in Thundridge to poor of Thundridge and in Steyning to poor of Steyning. Other personal names
20th May 1573

A/1735-1736 Lease and counterpart for 21 years
24th Oct 1812
Feoffees of Thundridge Charity (Jane Wall) to Thomas Brewster of Wadesmill, miller. Messuage called “Great Carpenters” and lands. Endorsements – 31st May 1815 re Almshouses, etc on the land