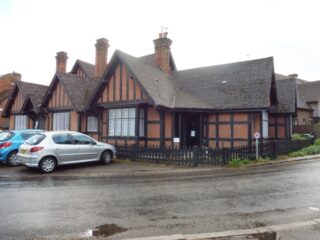 Albury Memorial Hall and almshouses. The almshouses are to the right. Sep 2016
Colin Wilson 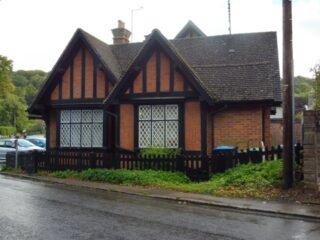 Aldbury Memorial almshouses from the direction of the church. Sep 2016 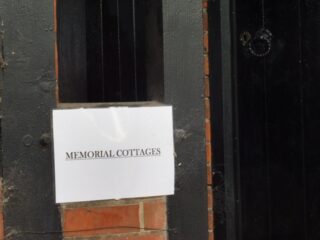 The paper sign on the almshouse door. Sep 2016
Colin Wilson

The building was erected in memory of Richard Mountford Wood M.A., late rector of the parish by his widow and children in the year 1891. The building, along with the almshouses, was donated by the Craufurd family to Aldbury village in 1892. How these two facts are reconciled is unclear. Victoria County History, published just a few years later,  does not refer to these almshouses. To confuse the issue a little further, the Aldbury Conservation Area report cites the date as 1889, while Vyse cites 1901.

Soon after the almshouses were instituted the matter of tax liability was raised. Essentially, the suggestion was for a trust to be set up otherwise death duties could be payable on the death of the tenants. Any such trust would stipulate that neither the trustees nor other persons would have any financial interest or benefit.

The buildings were managed by the Craufurd family until the 1960s when a Charitable Trust was set up for the benefit of the inhabitants of Aldbury. The Hall and the almshouses are managed separately by two volunteer committees.

The external appearance is of one building, but it is actually a village hall with two almshouses to the side, built in the mock Tudor style.

Vyse adds that there is no endowment stone, but that a wooden plaque set up in 1970 says the building was renovated by friends & relations of Sir James Craufurd, grandson of original donors. A visit in September 2016 simply had a paper sign by the front door.

The almshouses are affiliated to the Almshouse Association and registered with the Charity Commission. The Charity Commission website records the purpose as being provision of housing for poor persons. Standard registration occurred in 1963, with a scheme added in 1974. There are currently three trustees. Annual income is in the region of just over £5000 a year.

DE/X952/1. Papers re Aldbury Village Hall, building and trust, 1891 – 98. It includes the document recommending the trust and two bills.
CV/ABY/35 is a photograph of Aldbury Almshouses by Bailey, taken in the mid 20th century

https://www.aldburymemorialhall.org/about-the-hall is a 2015 information sheet about the hall, which mentions the almshouses and includes a picture of an information board.

https://www.almshouses.co.uk/listing/memorial-cottages/. This site lists the almshouse but provides no further information.